Recently I asked in a survey, “What topics in raw cuisine most interest you?” The unanimous agreement was raw chocolate. It seems chocolate’s sensuous quality simultaneously melts our hearts too, emotionally and nutritionally. However to fully appreciate chocolate, let’s first delve into the origins and varieties, and understand the processing of Theobroma cacao.
Contents (click to jump) 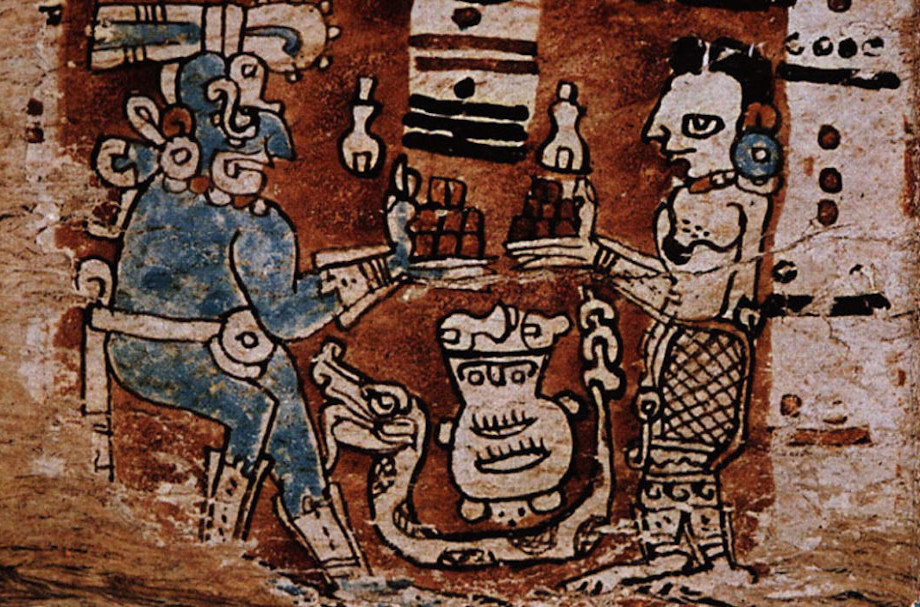 The use and delight of cacao began at least 3000 years ago among the Mesoamerican populations and it is thanks to them we can now enjoy Theobroma cacao, food of the Gods, in our everyday life. The Olmecas (1500-1400 B.C.) were the first to savour chocolate as xocolatl, meaning bitter water. The cacao beans were crushed then macerated with hot water, and spiced with chilli and cinnamon. The “chocolate culture” flourished with the Mayan (600 B.C.) and Aztecs (1400 A.D.). From being an exclusive luxury consumed by the elite class, cacao beans were such in demand that it became currency for trade during the Aztec civilisation.
< 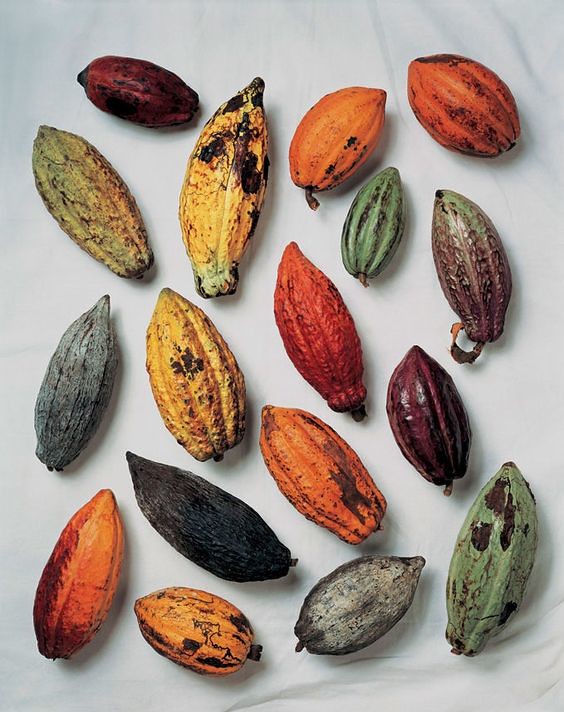 Criollo (meaning “of the New World”) comes from Central America and some parts of the Caribbean and is the first cacao variety to be cultivated. An heirloom variety, Criollo is treasured for its creaminess, full aroma and complex flavour which can be floral, fruity or spicy, and none of the astringent tannins of other cacao varieties. It is sought after by high end chocolatiers to produce fine artisan chocolate. However, Criollo is a low yield cultivar and susceptible to disease. It represents only 1-5% of global cacao production.

Forastero (meaning “foreign”) wild ancestors were from the Amazon region and was domesticated later than Criollo. Forastero is the most widely cultivated due to its high-yield and disease-resistance and accounts for 80-90% of global cacao production, mainly in West Africa, Indonesia and the Philippines. Forastero is considered the mainstream ‘workhorse’ cacao variety, easy to grow but without the refined taste.

Trinitario (meaning “from Trinidad”) is a hybrid of Criollo and Forastero that originated as an aftermath of a hurricane in Trinidad in the late eighteenth century. Forastero trees were imported and bred with the few remaining Criollo trees to create the Trinitario variety. Tastewise, Trinitario sits pleasantly in the middle of the spectrum, blending the superior taste of the Criollo and the resilience of Forastero.

Nacional (also called Arriba Nacional) is the rarest known cacao variety that was only recently rediscovered in Peru in 2011. It is mostly cultivated in western South America, Peru and Eucador. Like the Criollo, it is low-yield and prone to disease, but has an excellent aroma. Nacional beans produce chocolates that are rich, creamy, and with little bitterness.

CACAO PROCESSING AND PRODUCTS FROM BEAN TO BAR 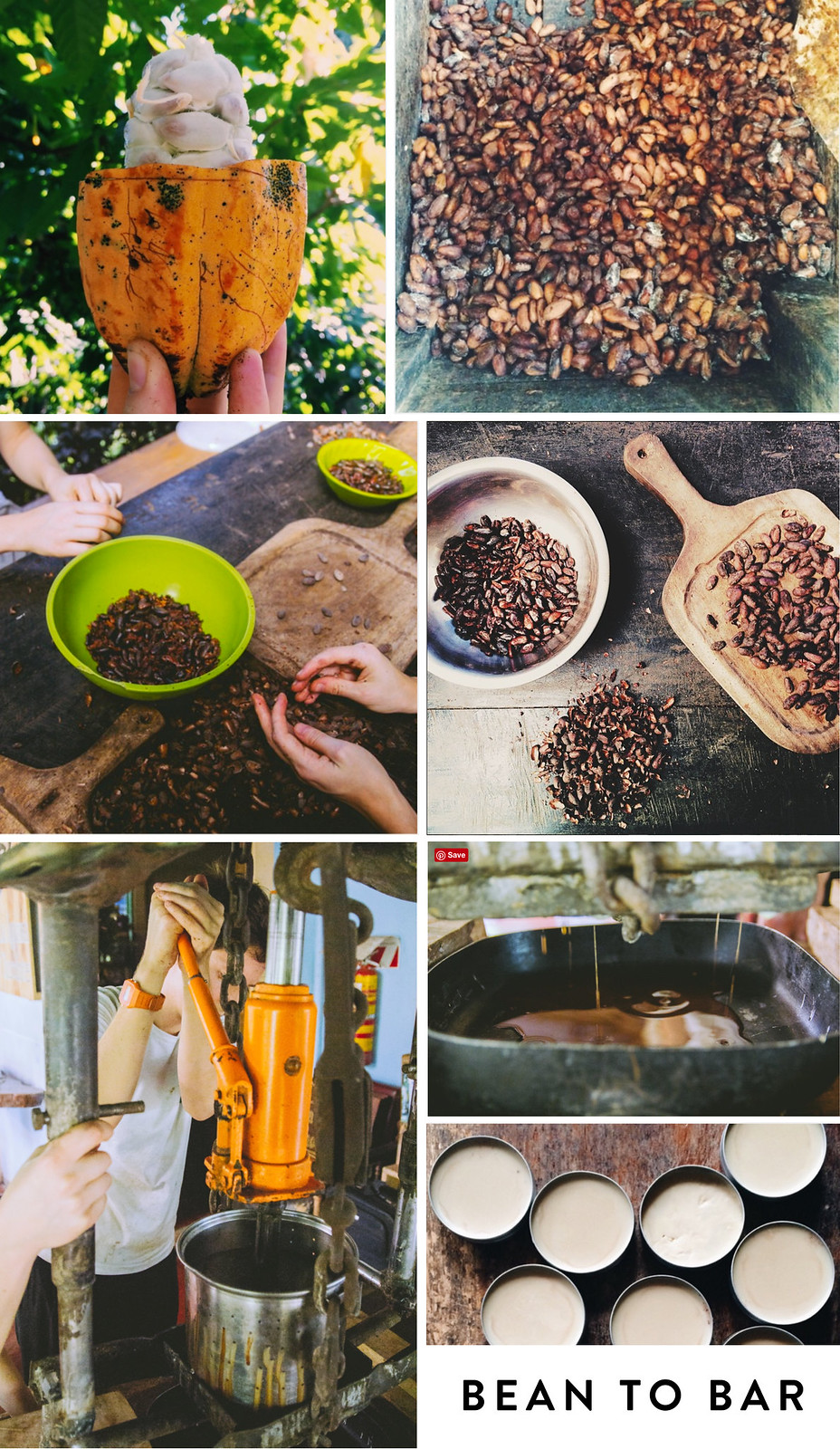 Cacao Paste or Liquor
Cacao paste is stone-ground cacao nibs. When the beans are ground after fermentation, they turn into a liquid from the friction and then solidify into a paste when cooled. Cacao paste can be melted or used dry in recipes, to achieve a creamy or textured consistency.

Cacao Butter
Cacao butter is the fat separated from pressing cacao paste with a hydraulic press. Cacao pressing was invented by Dutch chocolatier van Houten in 1828. Whole unprocessed cacao contains about 54% fat – too much for a palatable chocolate drink and yet too little for a decent chocolate bar. By creating separate cacao powder and cacao butter (fat), it allows the chocolatier to recombine as much fat as he wants with cacao powder to create chocolate of varying levels of intensity.

Besides chocolates, cacao butter can be used in many desserts of even smoothies for a luxurious taste, as well as being a binder. It melts very quickly at body temperature (34-38 °C), which is responsible for the melt-in-the-mouth sensation loved by chocolate eaters. However, cacao butter does not contain many of the nutrients and antioxidants found in whole cacao. To melt cacao butter for recipes, shaved or finely chop it when solid, then melt in a bain marie until liquid. Cacao butter can also be used as an excellent massage oil and moisturiser for the skin.

Cacao Powder
Cacao powder is what is left over after cacao butter is extracted from the bean. It is the most commonly found cacao product and great for adding a rich chocolate flavour without too much of the fat. The fat content of cacao powder is about 15-20 percent.

Fair Trade. Fair Trade means fair dealing and trading. Many small chocolate producers in developing countries are forced to sell their products at unreasonably low prices via middlemen who take a large cuts of the earnings. This can create dire working conditions and exploitative labour for the workers. Fair Trade is a response to this. It is a trading partnership between producers, importers, stores and consumers based on the idea that producers will receive fair payment, good working conditions and have their human rights respected. With added benefit, by receiving a fair price, Fair Trade producers can avoid cost-cutting practices that sacrifice quality and control environmental impact and the opportunity to farm organically. This enables long-term benefits in both social, environmental and economic development

There are four major international Fair Trade organisations – FLO, WFTO, NEWS!, EFTA – collectively called the FINE network. However many cacao producers are still wary of Fair Trade and other certifications because they think it costs too much. Some farmers have therefore started their own cooperative instead.

Organic. Organic is a natural system of farming that integrates cultural, biological and mechanical practices that foster cycling of resources, promote ecological balance and conserve biodiversity. Organic foods are produced without the use of genetically modified organisms, chemical pesticides or fertilisers and irradiation. Certified organic cacao means that cacao beans are grown and processed through methods approved by certification bodies.

Raw. There are no official labels or third-party regulations for raw food certification, but the general consensus is that the food is prepared under 46°C (115°F). The premise is to preserve the maximum amount of nutrients, enzymes and antioxidants. Raw chocolate contains more antioxidants than ordinary chocolate, which makes it more nutritious. Raw chocolate is increasing in popularity and now readily available in the market (see recommended brands below).

Vegan. Vegan chocolates means that the chocolate is made without animal products, such as dairy.

Ceremonial chocolate. In ancient times, cacao was used in a ceremonial fashion by shamans and healers, combining spiritual/sound energy and the inherent benefits of heart-healthy cacao to create a powerful heart opener and spiritual medicine that invokes a state of elevated consciousness, awakening and transformation towards new intentions and goals. The cacao ceremony may include first sharing, imbibing the spiritually charged cacao, and end with dancing, during which the cacao activates within the body and the heart and aid the transformative process.

Ceremonial cacao that during the ceremony is of a very high grade (typically Criollo), grown in pure conditions, harvested and prepared with love. A ceremonial dose is around 15-45 g (1–3 oz) of pure cacao, mixed with 120 ml (4 oz) water into a drink. Traditionally it is served with chilli and cardamom, both warming synergistic herbs which assist the cacao assimilate into the bloodstream and act as a spiritual accelerator. It can be sweetened, though many purists who understand cacao add no sweetener at all.

Chocolate is categorised by the industry according to cacao percentage by mass as Dark (unsweetened, bittersweet, semisweet), Milk and White.

Below are some raw cacao companies whose products I have used, vouch for their quality and recommend. Most do worldwide shipping from direct purchase on their website, or are available through online distributors such as iHerb. Big Tree Farms cacao is available at Zenxin Organic in Singapore.

I hope after this post you have a deeper understanding and appreciation of cacao, food of the gods. Stay tuned for parts 2 and 3, on the topics of making raw chocolate, tempering, different types of chocolate products, with recipes.