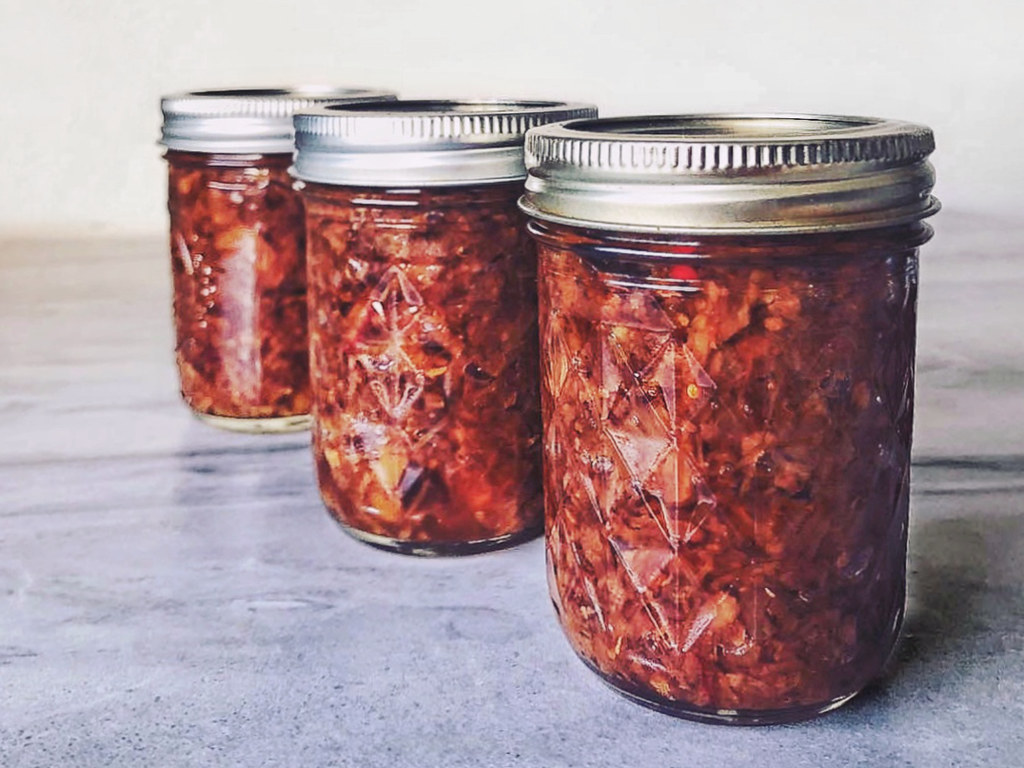 Vegan XO relish – still an explosion of intense spicy umami, without the seafood or ham.

I had wanted to develop this recipe for vegan XO relish before Chinese New Year, but failed. Nevertheless, better late than never! I finally got around to testing a recipe from Red Hot Kitchen (Diana Kuan) that I was in my bookmarks. The original recipe did not have nori, but I adapted and included nori for an even greater umami punch from the synergy of guanylate-rich dried shiitake mushrooms and free glutamates of nori and kombu.

What is XO Sauce?

Named after XO Cognac to symbolise luxury and status, XO (Extra Old) sauce is a deluxe spicy and chunky relish devloped Hong Kong in the 1980s. It is based on dried seafood (dried shrimps and scallops), ham (Jinhua ham), chilli, onion and garlic. These first three ingredients are especially appreciated for their intensity and complex flavour. However, it is a misnomer in that it contains neither alcohol nor is it a smooth sauce; it has a chunky texture, hence I prefer to call it a relish.

How does XO Sauce taste?

To describe the taste of the seafood-ham relish, one first tastes the chilli, then the amalgam of briny seafood, before the cured ham takes over. It is extremely moreish, spicy, salty and sweet, and of course, umami.

A chart of foods that contain umami, ranging from very small quantities on the left to an abundance on the right. Top: foods with basal umami (from glutamate or MSG); Bottom: foods with synergistic umami (from nucleotides). The trick is to combine a basal item with a synergistic item. From Umami by Ole G. Mouritsen and Klavs Styrbaek via PopSci.

In the vegan version, we select specific plantbased ingredients that are known to be high in basal glutamate, along with those that provide synergistic nucleotides (see illustration). In their book Umami: Unlocking the Secrets of the Fifth Taste, Mouritsen and Styrbaek explain that glutamate occurs naturally in some fresh foods, e.g. asparagus, potatoes, walnuts, and is increased over time as more as proteins break down through ageing or fermentation. However this basal umami can be intensified and sustained by eight times or more by complementing with the nucleotides inosinate (IMP), guanylate (GMP) or adenylate (AMP). Mushrooms, particularly dried shiitake mushrooms, are hotbeds of GMP. For the vegan XO relish, we are using dried shiitake mushrooms, nori, kombu, tamari, and garlic for basil umami; and dried shiitake mushrooms double up to provide synergistic GMP. The smoky notes of toasted cumin, smoked paprika, while not contributing direct umami, accentuate its effect through deepening the flavour of the sauce.

This recipe makes for a moderate-high spice level. Adjust the amount of chillies to suit your spice tolerance.

How to use Vegan XO Relish 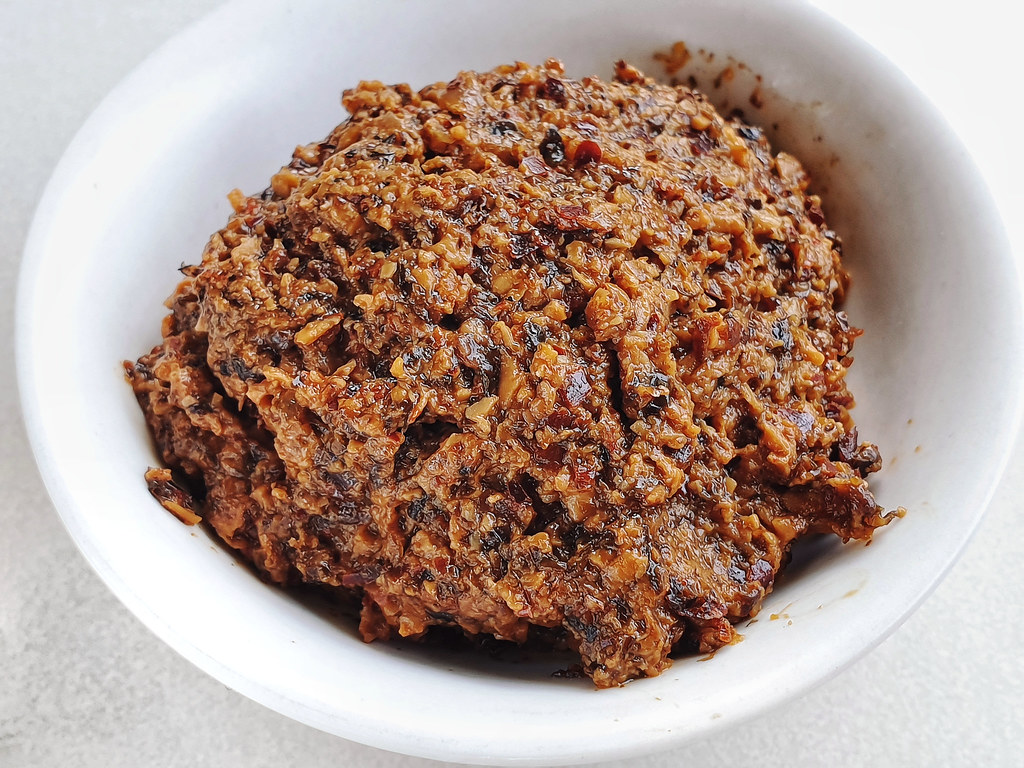 A spoonful of vegan xo will elevate any dish

Just like regular XO sauce or any relish, you can use it to spice up any dish from vegetables to savoury porridge. Typical dishes include green beans with XO sauce and radish cake (lo bak go) with XO sauce. I attempted a radish cake, hoping I could include a recipe for this post, but unfortunately it did not work out. Till then, enjoy this vegan XO relish!

A vegan adaptation of the Hong Kong XO sauce. Dried shiitake mushrooms, nori, dashi, caramelised shallots, toasted cumin, and smoked paprika are the keys to getting the moreish, umami taste of the seafood-ham sauce.