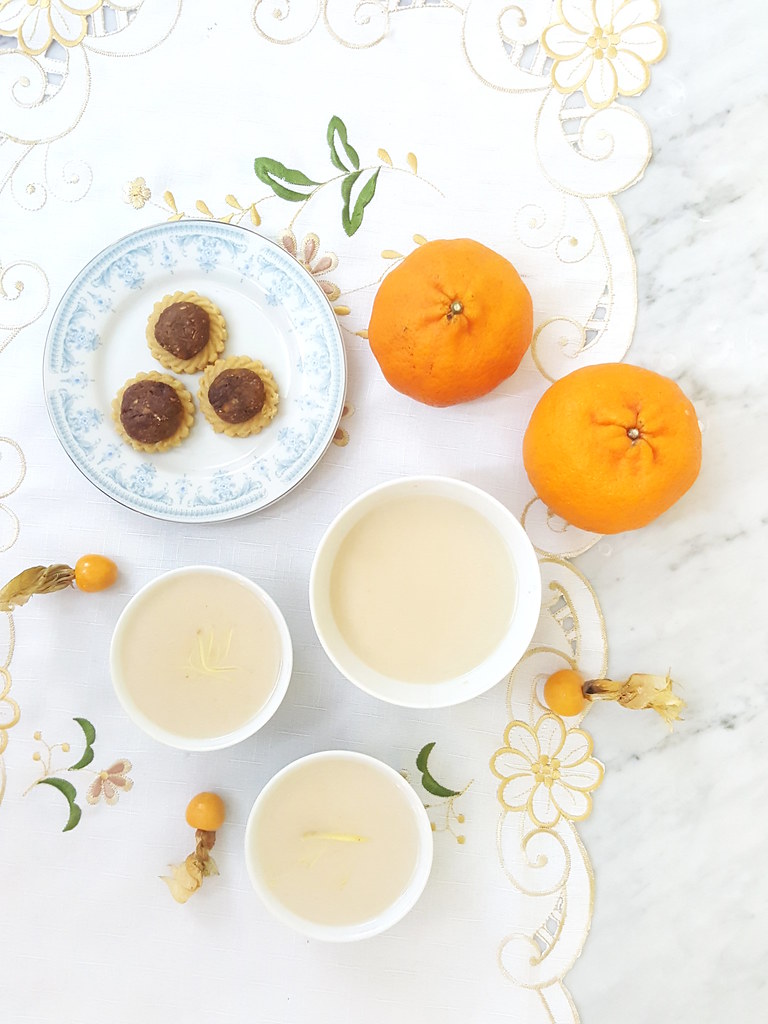 Amazake (pronounced ah-muh-zah-kay) is Japanese for “sweet sake.” It is a creamy, non-alcoholic, fermented drink with an ambrosial, nectar-like natural sweetness.. The sweetness is brought about by enzymes in kome-koji (cultured rice inoculated with Aspergillus mold) which break down starch in cooked sweet rice into simple sugars. Commercial amazake in stores is likely pasteurised, which kills desirable probiotics. Homemade amazake is best and easy to make! While amazake is the first stage in the Japanese sake-making process, it is also regarded as an independent beverage.

Two-stages of fermentation in Amazake

In the first stage, steamed rice is inoculated with spores of Aspergillus oryzae mold, and incubated (typically in shallow wooden trays called morobuta) in a warm place (27-30°C or 78-86°F) with occasional stirring for 36-48 hours until the rice is covered in a fragrant white mycelium. The product, called kome-koji, serves as a rich source of enzymes in stage 2 – amazake fermentation. In Japan, it is sold in sake breweries or supermarkets and available in fresh or dried form. It is used as a starter for amazake, miso, soy sauce, mirin and vegetable pickles.

In the second stage, abundant enzymes in kome-koji, especially amylase, hydrolyse the starch in both koji and freshly cooked rice to simple sugars, which impart the surprisingly concentrated natural sweetness. When making amazake, you can determine how sweet the product will be by the amount of koji you use – the more koji, the sweeter the amazake.

How to make Amazake

The basic recipes calls for one part uncooked sweet rice (white or brown), two parts water, and one to one-half parts koji by weight, depending on the desired sweetness. For example, 200 g (1 cup) of rice is steamed until done, cooled to 60°C (140°F) or moderately hot to the touch, then mixed with 200 g (2 cups) of kome-koji. The mixture is transferred to a wide-mouth jar or crock, covered tightly and incubated at 60°C (140°F) for 10-14 hours with occasional stirring. An immersion circulator or thermos flask can be used to maintain the temperature. At 60°C (140°F), bacteria and mold will die, but enzymes in koji are active to convert starch to sugar. The fermentation is complete when the mixture has a rich, sweet fragrance and the individual grains are very soft.

Another way of making amazake is from residual sake lees. This does not require fermentation and contains added sugar. It is also known as amazake, which can be confusing. While sake lees still contain some active enzymes, the quantity, quality and benefits of the resulting drink is less than fermented amazake. The directions for this method are in the recipe card below.

How to enjoy Amazake

The traditional Japanese way of serving amazake is to combine 1 part of this base with 2 parts water in a saucepan and bring to the boil. Season lightly with rock salt, pour into cups, and top each portion with a dab of grated ginger root. I like to flavour my amazake with matcha, or use other types of tea/herbal tea as the base such as hojicha, mugicha, chai or coffee.

Amazake is packed with other nutrients, including vitamin B1, vitamin B2, vitamin B6, folic acid, ferulic acid, dietary fibre, glutamine, and a large amount of glucose.