As we move into winter solstice (dong zhi) festival and Chinese New Year, it’s time to gear into Asian mode. Today’s post is a feature on the superberry Schisandra chinensis that is widely used in traditional Chinese medicine and gaining also popularity in the West, along with a recipe for locally-inspired drink, Bandung, with Beetroot and Schisandra.

Schisandra is another herb with a long history of use in China. In Mandarin, it is called wu wei zi (五味子) or five flavour berry because it contains all five flavours – predominantly sour and sweet with salty, bitter and pungent overtones. In Chinese medicine, the flavour of the herb has an effect on its elemental energy and action on the organ network. Chinese herbalist Ron Teeguarden in The Ancient Wisdom of the Chinese Tonic Herbs lists schisandra as entering all twelve meridians with a warming energy. It addresses all three treasures of life – Jing (life energy), Shen (soul) and Qi (force), thus making it one of the quintessential supertonic herbs of Chinese medicine and is used in much the same way as the highly esteemed Ginseng or Reishi.

Although Schisandra has beneficial effects throughout the body, it’s main action is considered to be through improving the vital energy of the kidneys.

Because of its warming nature, Schisandra is often used for yin deficient conditions of the lungs, digestion, liver or immune system manifested as chronic dry coughs, extended diarrhoea, night sweats and/or general weakness. It is a great remedy for deficient fire in synergy with similar warming, circulatory and stimulating herbs such as cinnamon and ginger.

Of note, modern science has confirmed the anti-inflammatory hepatotonic ability of schisandra. It is reported to increase antioxidant production and detoxification enzymes in the liver significantly, reduce liver fibrosis and inflammation and increase liver regeneration. In a clinical trial, schisandra improved liver function in patients with fatty liver disease and is an emerging herbal treatment for hepatitis, liver cirrhosis, high cholesterol, and various other liver-related disorders.

Schisandra should not be used in pregnancy and can be a bit warming and stimulating for some. Stop usage if you experience side effects such as dry astringency, insomnia or excitability.

You can find dried Schisandra in Chinese medical stores such as Eu Yan Sang (in Singapore). The dried berries should be dark purple with some pinkish undertones. If it appears too dark and does not have a pleasant sweet-sour aroma, it is likely too old or not of high quality. 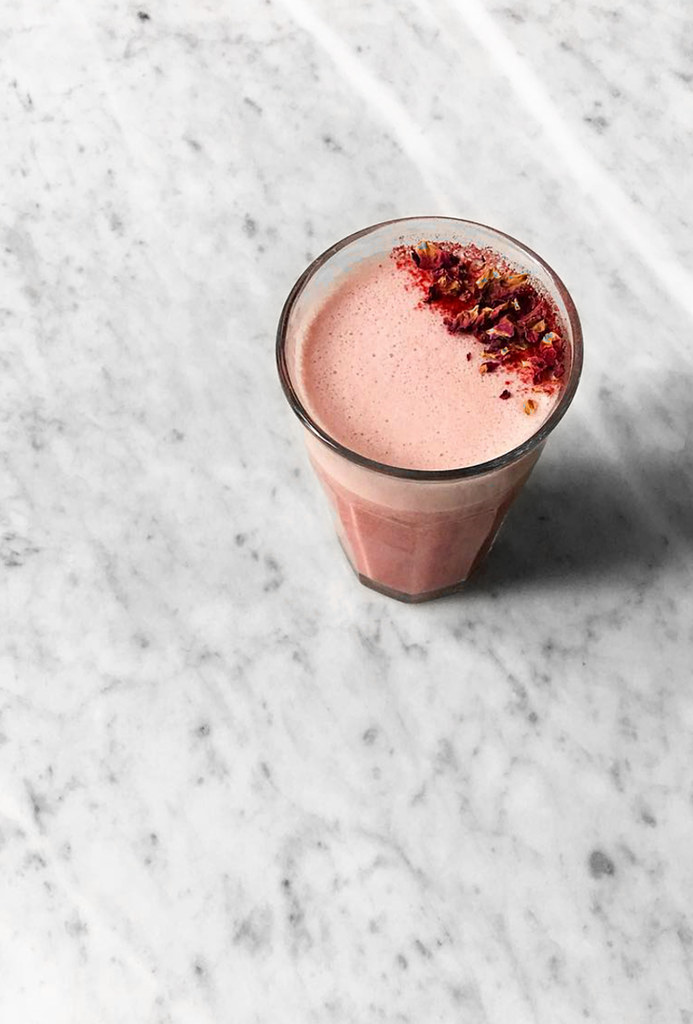 A creamy warming five-flavoured latte with a hint of rose, especially useful when you're feeling deficient in yin or fire energy. Beet juice cleanses the liver, ginger and cinnamon synergises the warming, circulatory actions of schisandra, licorice adds sweetness and tones the lungs, and astragalus supports long-term immunity. Sip and enjoy!