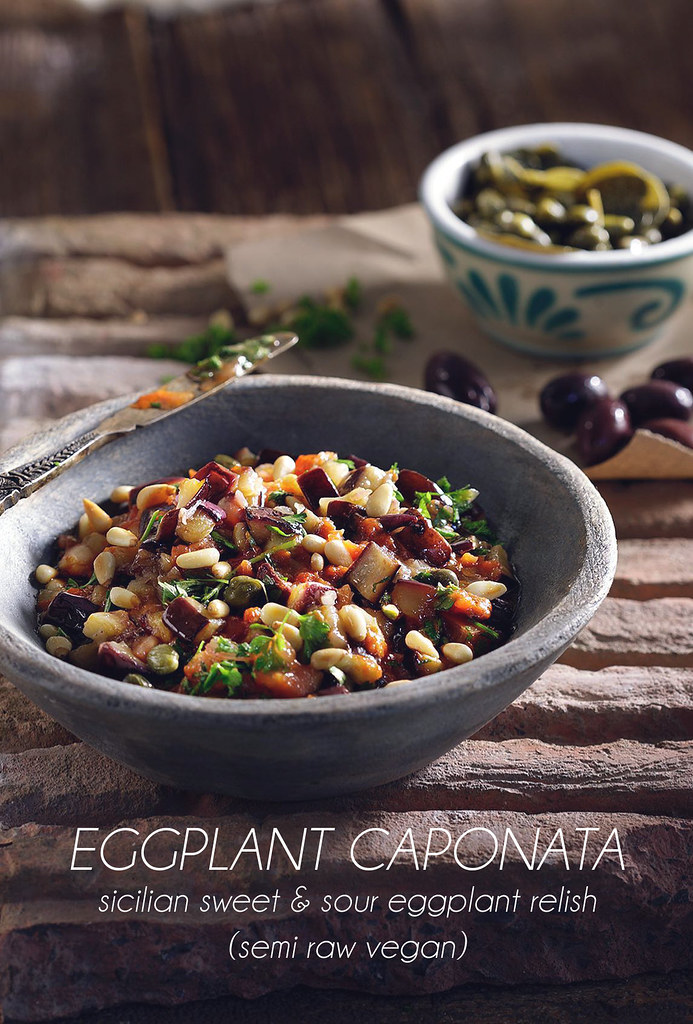 Here is another eggplant dish with summer vegetables. Almost every culture has its version of an eggplant dip or relish: Turkish Baba Ganoush and Moutabal, Indian Baingan Bharta, and Russian Baklazhannaia Ikra (poor man’s caviar). For Sicily, their answer is Caponata.

Sicilian Caponata is a chunky relish made with sauteed eggplant, onion, celery, tomatoes, and bell peppers or other late summer vegetables. It is invigorated with a bright agrodolce (sweet sour) flavour from currants and vinegar, a cooking style typical of the island, and balanced by salty capers and olives.

Traditional Caponata uses a large amount of olive oil to saute the eggplant. This semi raw and low oil version uses whole stove-grilled eggplant, essentially cooking the eggplant in its own skin and imparting a wispy smoky flavour. The other vegetables are soft-cooked in the dehydrator. Onions are sauteed in a bit of olive oil to mellow the pungency and mildly caramelise and draw out their inherent sweetness. A sauce is then prepared from the onions, sundried tomatoes, and half of the dehydrated vegetables. This sauce is used to coat the eggplant, remaining vegetables, olives and raisins.

You can customise your caponata to your tastebuds. An unconventional dash of cacao powder adds a pleasant hint of bitterness to the palate. Like some heat? Toss in some chilli powder. Avoiding nightshades or not a fan of eggplant? Swap the eggplant and bell peppers with zucchini and use a nightshade free tomato sauce (such as carrot based); dehydrate diced zucchini along with the vegetables and you have a higher raw version. Seeking a lower carb option? Omit the currants or use a lower sugar dried fruit like prunes.

Eggplant caponata can be served alone as a side dish, and as a delicious topping on your favourite raw bread, toast, or pizza.