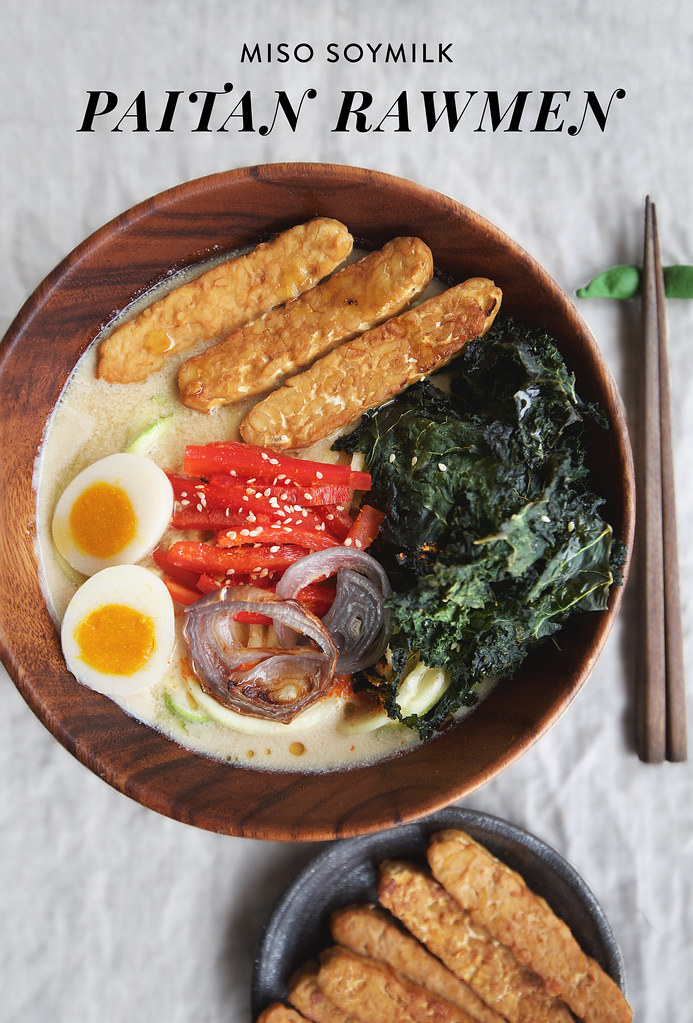 Of the many styles of ramen, paitan refers to a creamy, milky soup. This is normally achieved by simmering animal bones, such as pork or chicken, over long hours to break down cartilage and fat, eventually yielding a collagen-rich emulsion. In creating a vegan paitan stock without animal products, there are two parts to dissecting the conundrum: a power umami base and the creamy, milky factor.

From my experiences in vegan ramen and ramen class in Japan, which included the original famous Towzen ramen in Kyoto and Washo’s cooking class in Osaka, I picked up that the creamy factor could be easily solved by adding soy milk. Quite a no-brainer isn’t it? The problem is that soy milk tends to mute the umami flavours of a stock, hence we need to build an ultra-umami stock that can stand up to the addition of milk.

The power umami base employs layers of high glutamate ingredients. It starts with a dashi concentrate of with a high proportion of kombu and dried shiitake to water. As the optimal temperature for glutamate extraction is 65°C, it is best if you leave the kombu and shiitake to steep in hot water overnight. The second layer of umami is mushrooms roasted in tamari. The trinity of onions, garlic, and ginger are first charred to caramelise their sugars, then when added to the stock, they lend a sweet, smoky undertone and spread their inherent umami. After simmering to reduce and concentrate the flavours, the stock is strained. We are not done yet! Now, the fourth layer of umami is added, namely fermented foods – miso paste and sake lees, the byproduct of sake production. Sweet, savoury and funky at the same time, both build up complexity in the stock. Finally, freshly roasted sesame seeds (or tahini) is added, which thickens the stock and contribute a deep smoky nuttiness. These are blended with soy milk and strained, and the result should be a thick, creamy, milky, aromatic, deep, puzzlingly undecipherable complex stock of sweet and savoury. No one should be able to tell that not a single animal product went into it. I have provided soy-free options in the recipe card in case you wish to avoid soy.

When heating up the soup before serving, heat to just below boiling; do not boil as this will cause the soy milk and soup to split. 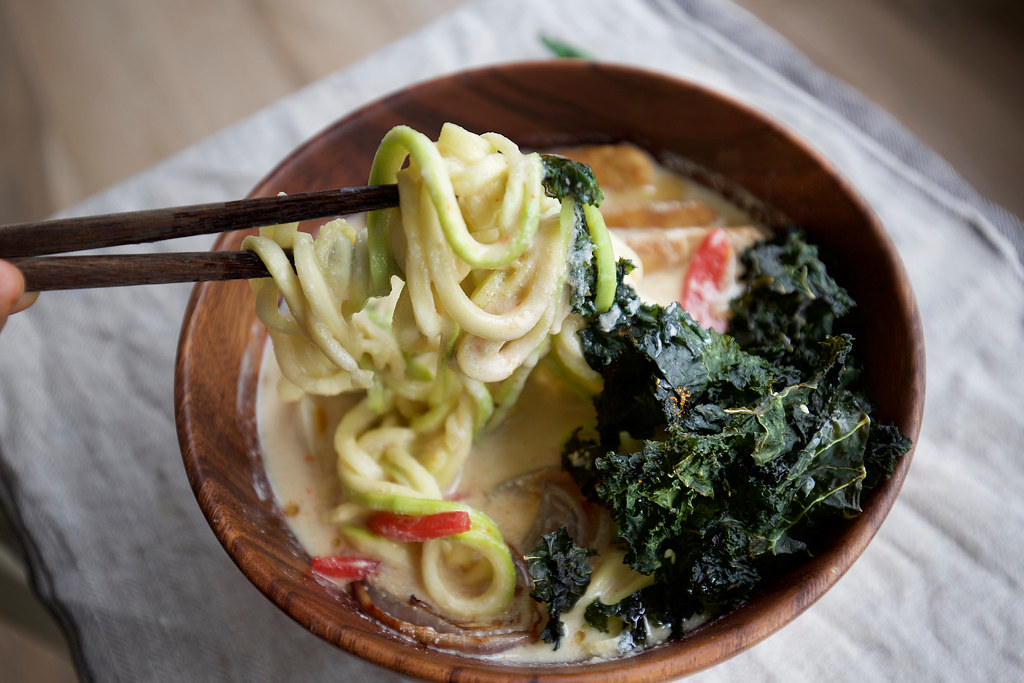 As I am unable to tolerate much grains and a general preference for raw foods, I chose to use spiralised zucchini as the choice of noodles. The trick to get slurpable zucchini noodles is to soften them by placing them in the dehydrator for 45 minutes. When mixed in the soup, they soak back the flavour-packed broth, and will not water and dilute the taste. You could use regular wheat ramen noodles if preferred. 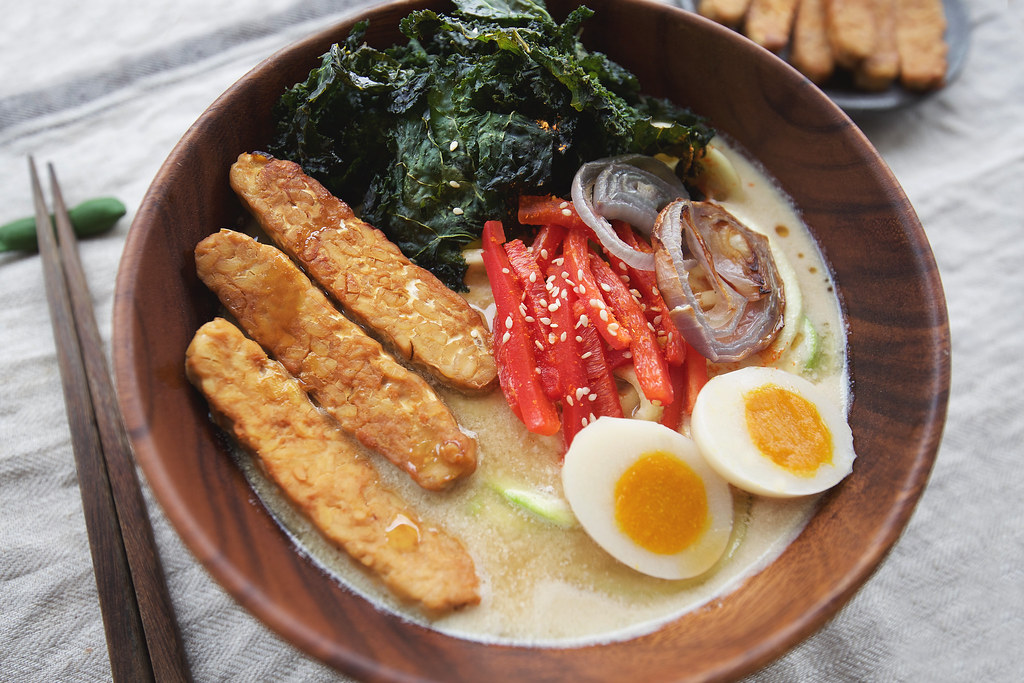 Once the soup stock and noodles are settled, ramen toppings are generally to one’s preference. This time I went with tempeh dengaku (miso-glazed tempeh), kale, red peppers, reserved charred onions, vegan egg made with tempeh milk whites and pumpkin yolk, and a smattering of sesame seeds and shichimi togarashi.
I was gifted the tempeh from Angie’s Vegan Pantry and was glad to put it to creative use. Dengaku is a miso-glazed dish that can be applied different vegetables like eggplant, daikon, tofu and tempeh. This marinade enhances but not overpowers the creamy bean taste of tempeh. For the vegan egg, I would typically use almond/soy milk but I switched it up with tempeh milk. I was apprehensive that it would taste funky and off-putting initially, but nope, it turned out quite unique with a hint of bitter tempeh taste. Just remember to boil your tempeh before marinating or making the milk to remove the funky flavours. 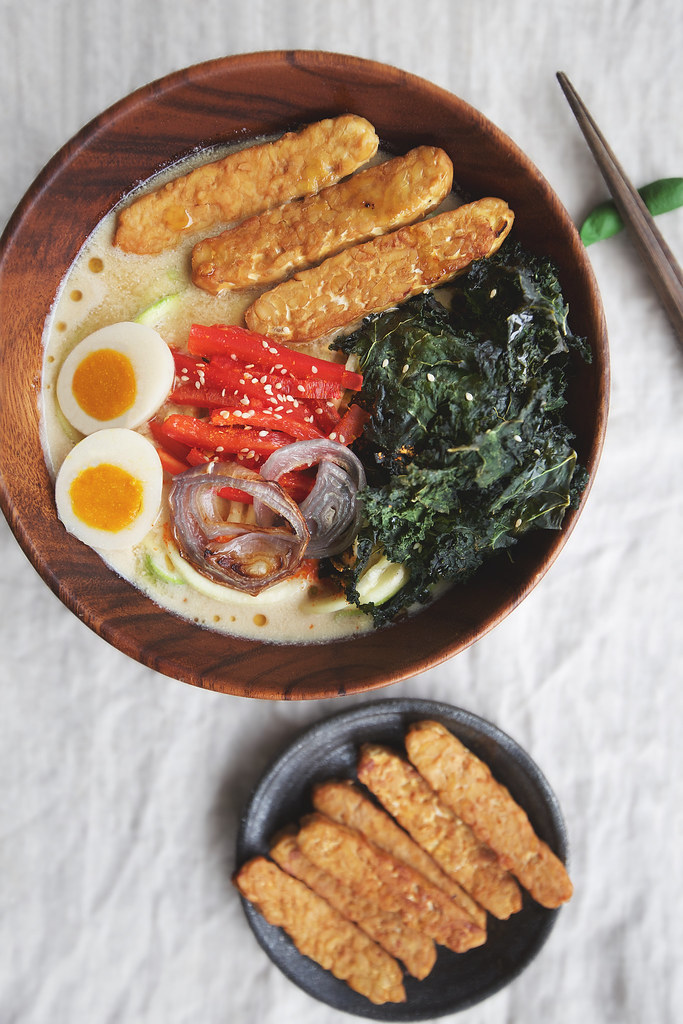 Looking for more Japanese-inspired recipes? Check out my: