Although not Jewish, I enjoy learning the traditions and flavours of different cultures. I have decided on a Passover theme for an upcoming raw food workshop at Trinity Community Centre. This is a culinary research post in preparation for the workshop.

Passover (‘Pesach’ in Hebrew) refers to the last of the ten plagues that descended upon Egypt described in the book Exodus, where the Angel of Death “passed over” Jewish houses marked with lamb’s blood. Today, Passover is celebrated by Jews to commemorate their deliverance from Egyptian bondage and their emergence as a free nation under the leadership of Moses, Judaism’s most important teacher and prophet.

Passover is marked by important rituals. During Passover, Jews are forbidden to consume or even possess chametz – any leavened or fermented grain products such as bread. Prior to Passover, observant Jews scour their homes to remove all trace of chametz. Ashkenazic Jews add rice, millet, corn and legumes to this forbidden list, collectively known as kitniyot. The first reason for the denial of chametz is to relate as closely as possible to the experience of the ancestors, where they had to leave Egypt in a hurry and did not have time to wait for their dough to rise. The second reason is that leaven is often viewed as a symbol of corruption in the Bible. Instead, Jews will consume unleavened bread called matzah as part of Passover observances. 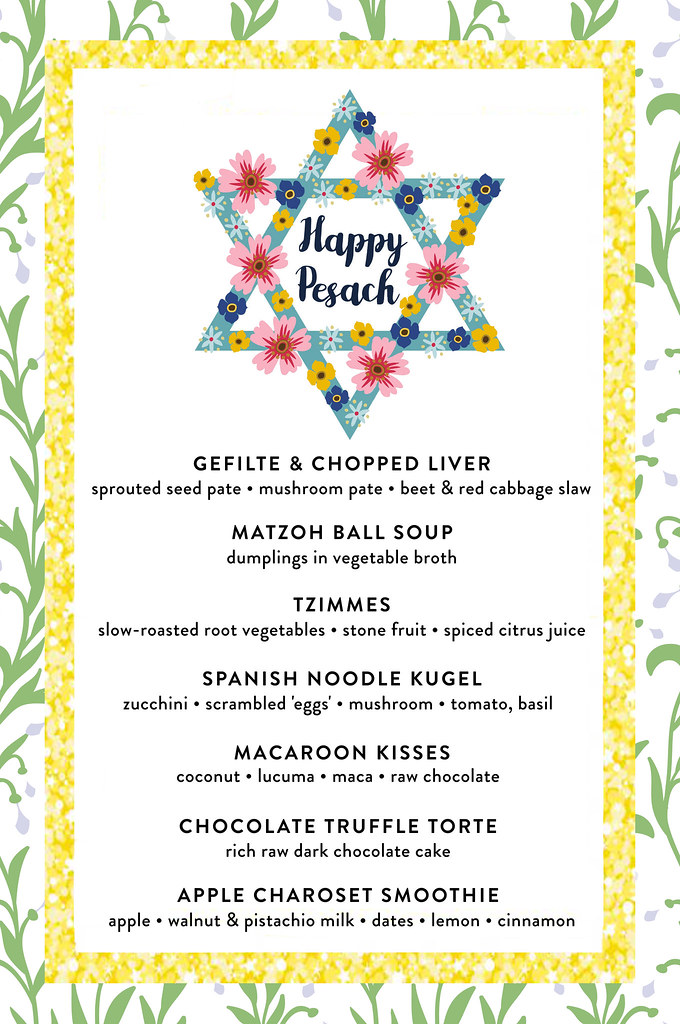 At the heart of every Passover experience is the Seder (meaning “order” or “arrangement”), which retells the story of Passover over an elaborate feast of symbolic dishes. Traditional dishes include the Seder plate, gefilte fish, chopped liver, chicken matzoh ball soup, kugel casserole, braised root tzimmes, coconut macaroons and flourless chocolate cake. These dishes are often heavy and rely largely on animal products. Here, I present an innovative seven-course plant-based raw/vegan fusion Seder menu that is inspired by the traditions and flavours of the Passover season, yet keeping it healthful, raw if possible, and avoiding the use of animal products. Scroll over and click each image to learn more about the symbolism of each dish with regards to Passover.

I did not post any of the recipes here, but if you like to have any, request in the comments and I’m more than happy to share! Thank you.