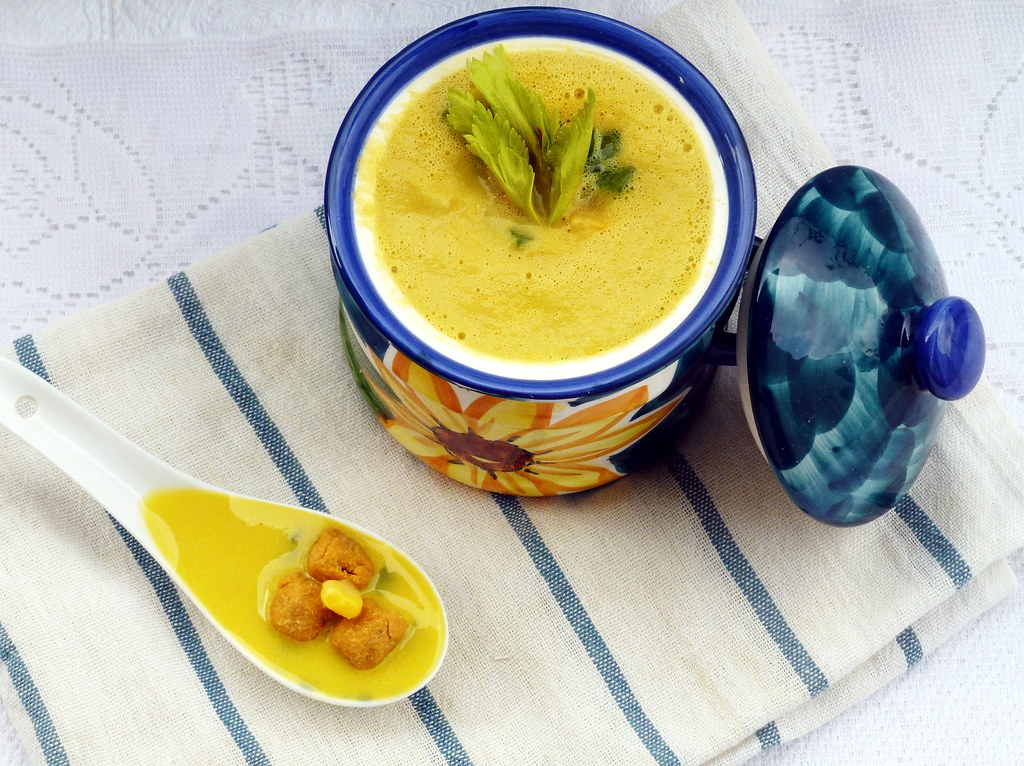 It was Produce Challenge week at Matthew Kenney Culinary Level 1. The challenge? To create and plate a dish using only produce that we had on hand in just one hour. What appeared to be an easy everything-but-the-kitchen-sink challenge was, in fact, the opposite. It required a selective curation of ingredients and decisions on specific proportions based on an understanding of the flavour of each ingredient. To take a break from the composite recipes of late, I decided on Corn and Zucchini Chowder with Chickpea Cheese Croutons.

The truth is I was never one to like corn because of its fibrosity until I tasted Hokkaido corn. Hokkaido-grown corn is phenomenally flavourful with caramel-esque sweetness and clothed in golden sheen, which is indicative of high concentrations of beneficial phytonutrients called carotenoids. According to one source, the environment it is grown in has a large diurnal temperature range. The cool nights mean the sugar created in the day does not turn into starch thus preserving the sweetness. High temperatures accelerate the conversion of sugar to starch and subsequent quality loss. Although it costs more than regular corn, it is worth the premium; so good it made me a corn convert. 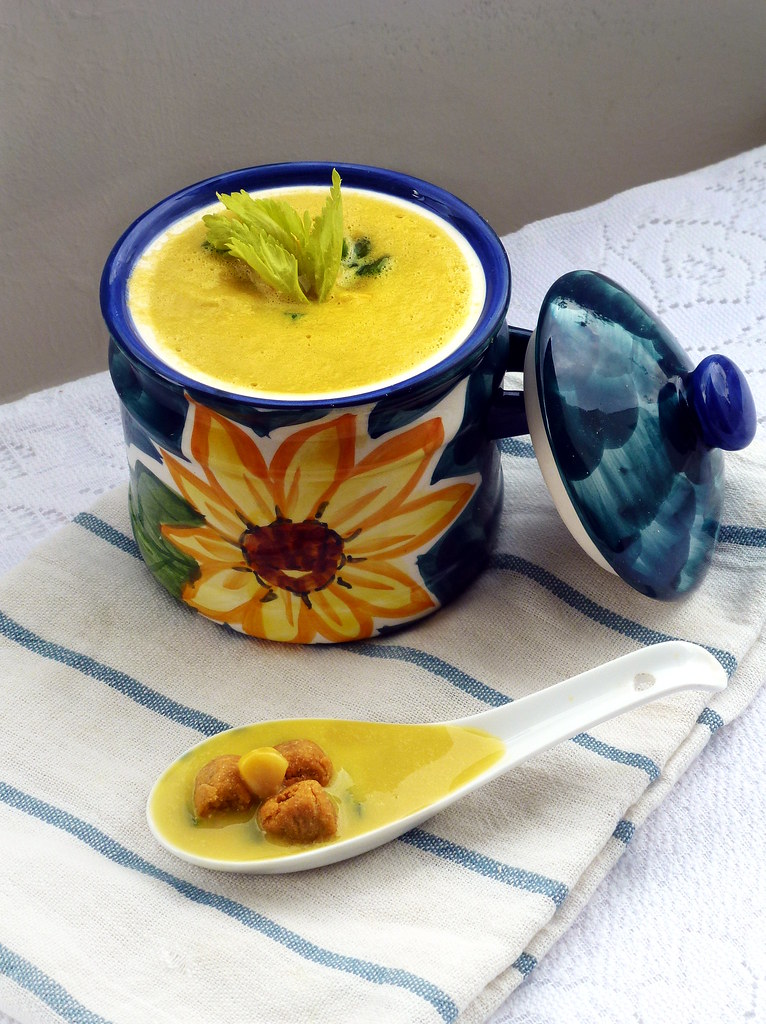 The word chowder comes from the French word “chaudiere,” a large three-legged iron cauldron in which French fishermen used to make seafood stews. They introduced this dish to Newfoundland, Quebec, where they settled in the 1600s. By mid 1700s, chaudiere had a stake in the kitchens of the people of Newfoundland and New England. The main ingredient of a chowder is typically seafood, such as clams, and thickened with flour. This raw version of corn chowder is thickened with cashew cream. I used miso to add depth of flavour and strained the mixture to remove roughage for a super smooth texture. Overall the sweetness of the corn, carrot and zucchini was well balanced against the saltiness of the celery and miso. 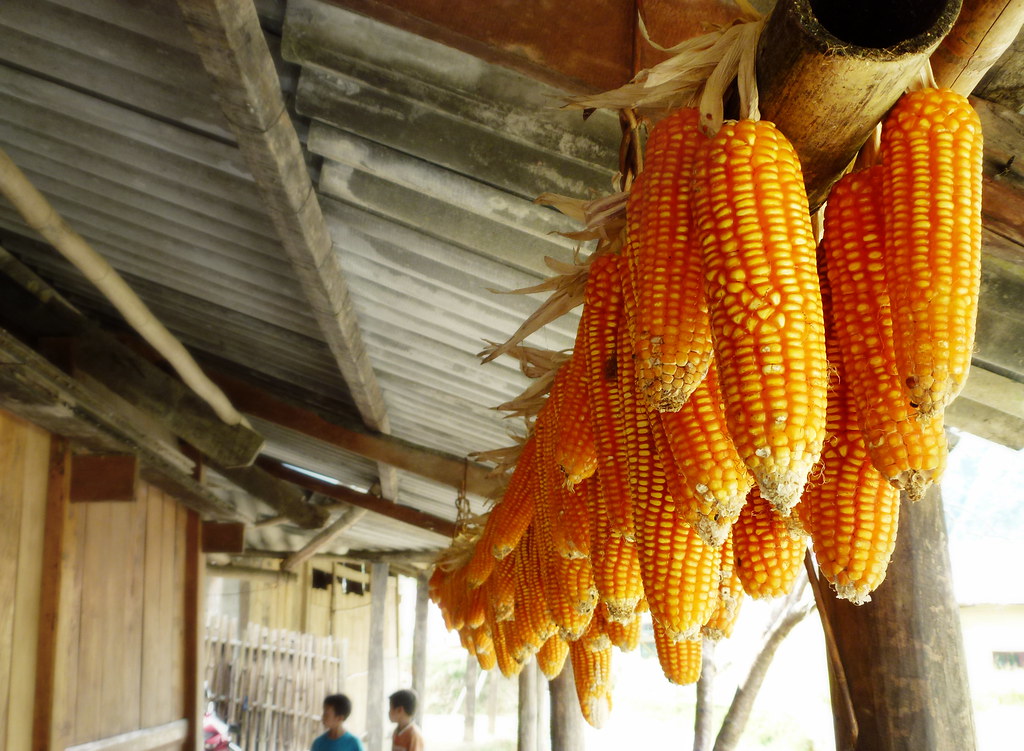 A caution about corn and genetic modification. Corn is the world’s most widely plant crop and about 92% of American field corn is now genetically modified to be herbicide resistant (Roundup Ready) and insecticide resistant (Bt toxin). Roundup herbicide by Monsanto that is sprayed on the corn is absorbed into the corn and cannot be washed off. Bt toxin insecticide are produced continually in every cell of the plant and and also cannot be washed off. Research indicates that the Bt-toxin, glyphosate (the active ingredient in Roundup herbicide) and GMO crops in general are associated with the following conditions: leaky gut syndrome, compromised gut bacteria, autoimmune disorders, weakened digestion and impairment of the intestinal wall. To be absolutely sure you’re not eating synthetic pesticides and herbicides, it is best to buy certified organic or even heirloom corn, if possible.

The chickpea cheese croutons was an experiment. It was meant to to light and crispy but unfortunately came out dry and hard. Since the croutons did not come out well, I will not post the recipe.

Serves 2
Love corn but hate those kernels stuck in your teeth? Then this creamy soup is the answer. It is thickened with soaked cashews and uses celery, carrot and miso for depth of flavour. When corn is in season (October), make up a large bowl of this delicious soup and watch it disappear! It is recommended to strain the soup; otherwise it will contain a great deal of roughage which can aggravate a delicate digestive system.
Ingredients
Add ingredients to shopping list
If you don’t have Buy Me a Pie! app installed you’ll see the list with ingredients right after downloading it
Instructions
Notes
Print
By Sabrina Chu
Straits Road Kitchen https://straitsroadkitchen.com/
0