Are you ready to rise to the Rooster year? It is time to stop the playful tricks of the Monkey, and be determined, punctual and responsible in our goals and tasks like the Rooster. The Chinese New Year starts from 28 January this year. Today I’d like to share with you an indispensable dish for Chinese New Year called yu sheng, made raw and vegan, along with some auspicious sayings. 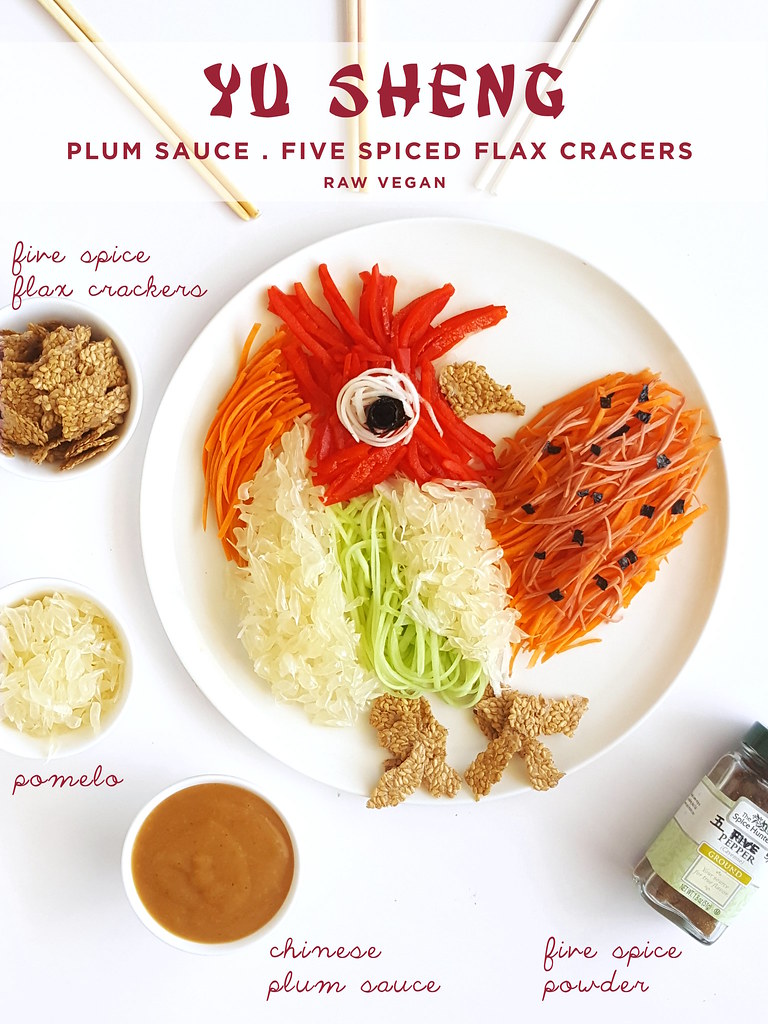 Chinese New Year festivities come along with many traditions – one of which is the Toss of Good Fortune. Known as “Lo Hei” in Cantonese (where 捞 “lo” means mixing), this interactive ritual involves diners tossing yu sheng (raw fish salad) as high as possible while belting out auspicious sayings, and is enjoyed with emotion and intensity by its members. Usually led by one individual, ingredients are added one by one in a predetermined order, while the server recites wishes of luck and prosperity evoked by the names of the ingredients used. Tradition upholds that the higher the toss, the better your prospects and fortune in the year ahead. 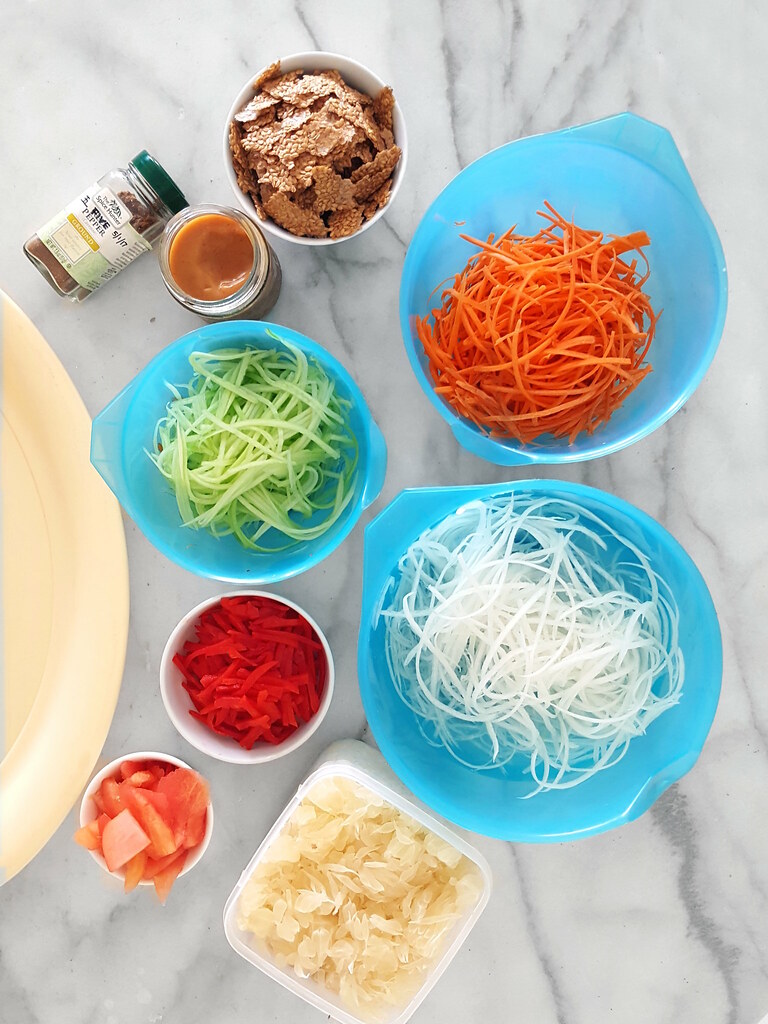 Traditional yu sheng, which origins trace back to more than 2,000 years during the Zhou dynasty, is a simple dish made up of thin slices of raw fish, shredded vegetables and a variety of seasonings and condiments. Over the years, the recipe has evolved into elaborate platters, some handcrafted with intricate designs and infused with exotic ingredients. In actual fact, it is not a common practice by all Chinese communities except Hong Kong and Southern China take this dish seriously. The custom was brought to Singapore in the early 20th century by immigrants of Cantonese and Teochew peoples. Because of this, until the 1960s, there were traditionally two different versions of yu sheng consumed in Singapore – Cantonese and Teochew. What we now associate with yu sheng today in Singapore is known as qi cai yu sheng (七彩鱼生) or “seven-coloured raw fish salad”. It is said to be invented by four chefs in 1964 to attract more customers to their newly opened restaurant, Lai Wah (now at 44 Bendemeer Road). They improved the visual appearance, aroma, and flavour of yusheng by making portions bigger and using a variety of colourful vegetables, while also giving it texture and depth through the addition of plum sauce, peanuts and flour crisps. In doing so, both the custom and dish became a more interactive and lively affair. 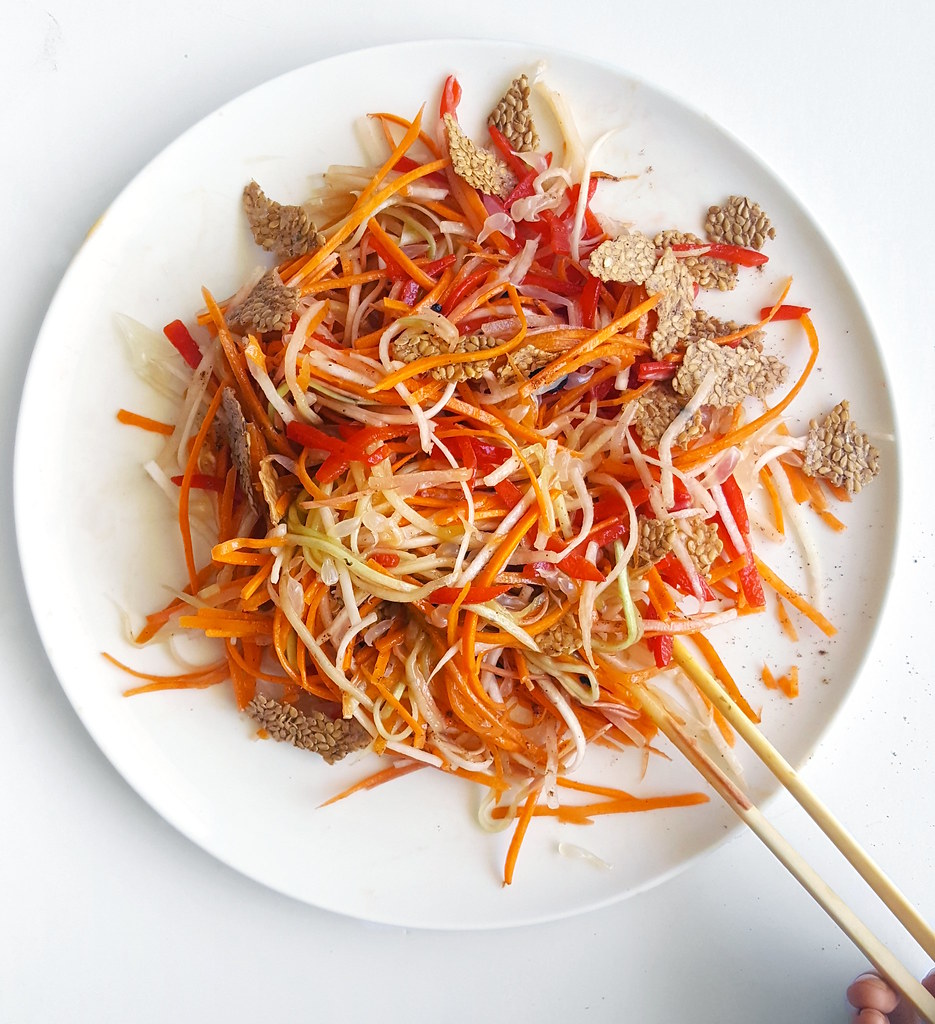 I prepared my own raw vegan version for the yu sheng. I changed the raw fish to my special sous vide Tomato Salmon (recipe to be released), golden pillow crackers to Chinese five spiced flax crackers and made a raw Chinese plum sauce from scratch. The vegetables, which evidently needed no alteration, comprised finely julienned carrots, daikon, pomelo (lots of!), cucumber and red bell pepper. The sauce is the key to the dish’s success – it should have a honey-like viscosity, sweet, sour and a little spicy. This raw vegan version uses fresh plums, dried apricots and thickened with Eucheuma paste. It tasted as far as I could remember like the ones I have had in yesteryears. I am so glad that I managed to come up with a replica for the salad that is suitable for all people (vegans, vegetarians, celiacs, paleo etc.). I think this is a good recipe to share with all of you; enjoy! Do recite the sayings as you make your yu sheng, it is all part of the festive fun. 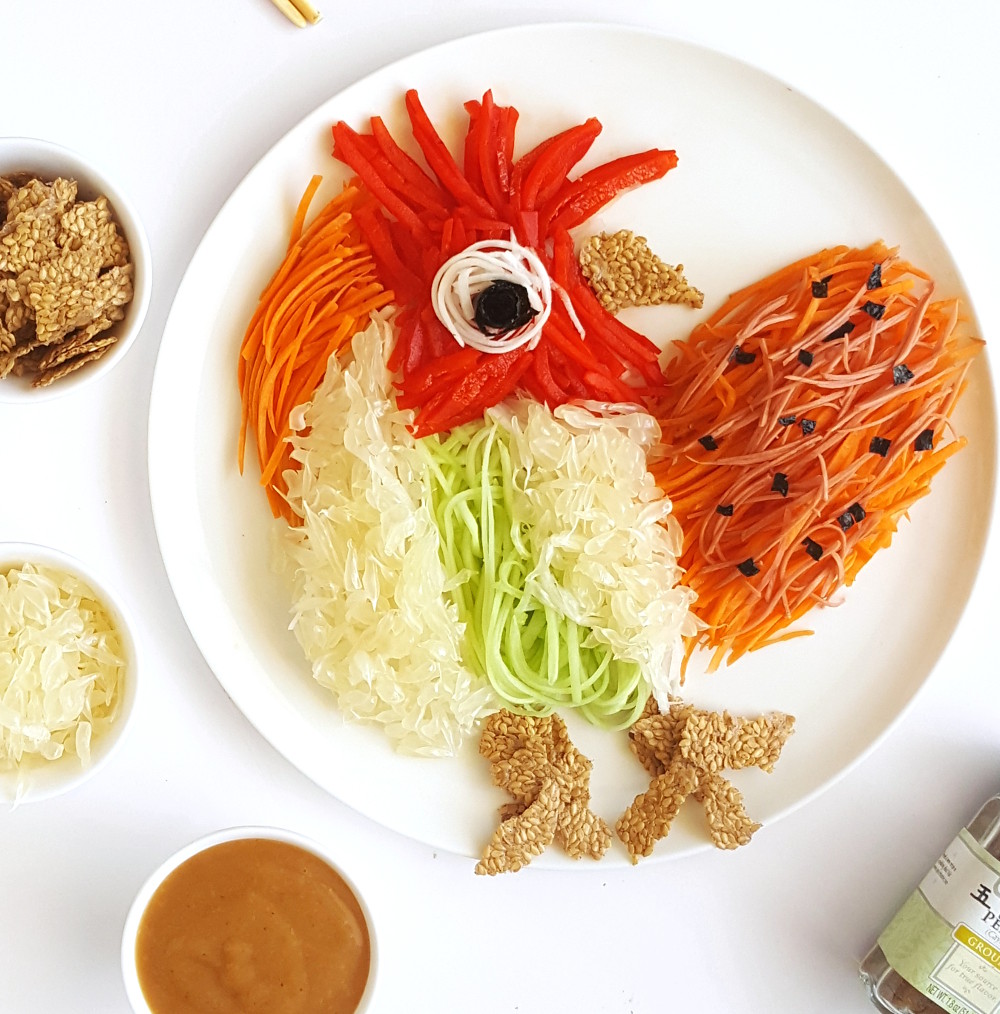 Serves 6
The indispensable Chinese New Year salad given a fully raw and vegan update. Many of the components are already raw like the vegetables and pomelo, but why not take a step further with a plum sauce from scratch and crispy five spiced flax crackers? When you Lo-Hei, belt out the auspicious sayings and toss as high as possible, which is believed to bring better fortunes in the coming year.
Chinese Plum Sauce
Chinese Five Spice Powder
Chinese Five Spice Flax Crackers
Pickled Ginger
Salad
Add ingredients to shopping list
If you don’t have Buy Me a Pie! app installed you’ll see the list with ingredients right after downloading it
For the Plum Sauce
For Chinese Five Spice Powder
For Chinese Five Spice Flax Crackers
For the Pickled Ginger
For the Salad
Symbolism of yu sheng ingredients with auspicious sayings
Print
By Sabrina Chu
Straits Road Kitchen https://straitsroadkitchen.com/
6