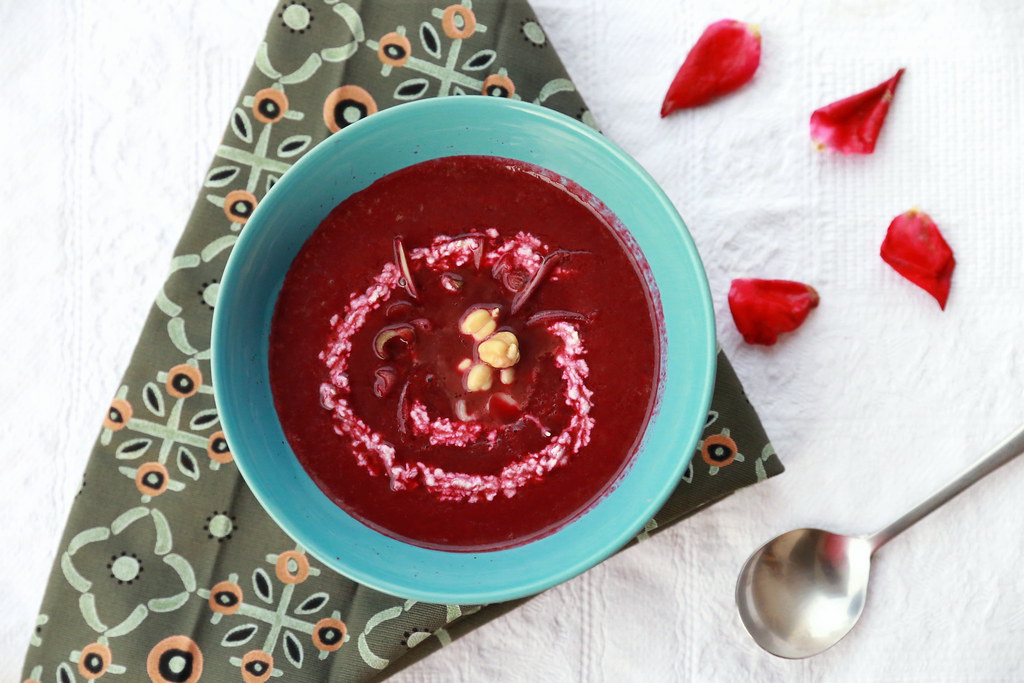 While a reflective mindset should be a daily practice, it becomes ever more manifest as another year draws to a close. We look back and appreciate what has been accomplished, the foolish mistakes made, set goals for what is to come, and prepare for change and growth.

In 2013, I pledged to have “less inspiration, more self-creation,” with the intention of developing a personal style and portfolio instead of looking at other artists’ works and striving to attain their successful level of skill. I did create several original works and was pleased with them, such as the Durian Bubble Bombe Alaska. I would describe my style as fresh, high raw and minimal, although one might also say traditional. On the self-creation side, I would say I have upheld that motto. No doubt undertaking the course Fundamentals of Raw Cuisine by Matthew Kenney Cuisine helped to develop my kitchen skills, knowledge and techniques. In fact, I daresay this intensive course was more interesting than any university courses I had been through!

Since we are on the topic of reflections and looking-backs, I decided to revisit and improve on two basic but favourite recipes: Borscht and Hummus, now made raw and vegan. 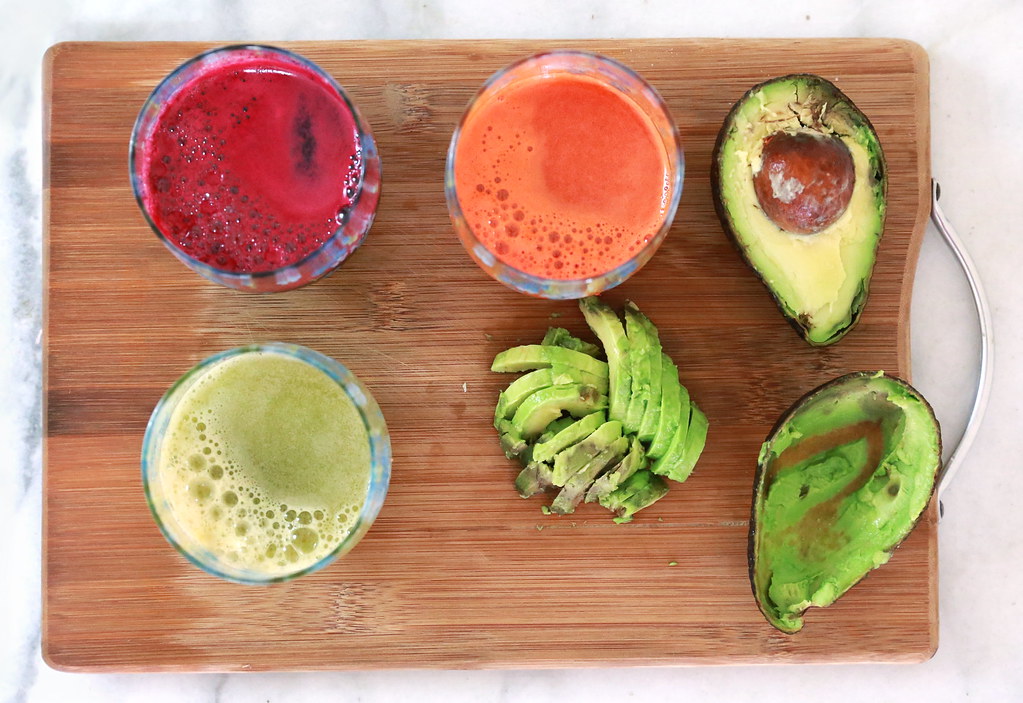 The first time I made Borscht, which was more than a year ago, I roasted the beets, then blended it with avocado and water. Though it was drinkable, it lacked refinery and had a chafing texture and flat taste. This time I collected the juice of beetroots, carrot and celery first, before blending it to velvety smoothness with ripe avocados. Beet juice on its own would be too dimensional; carrots add sweetness and celery a natural saltiness. You could make a huge mason jar of raw Borscht and store it in the refrigerator; it is so paradoxically comforting and invigorating to have this chilled cream glide down your throat in the morning or after a day’s hard work. 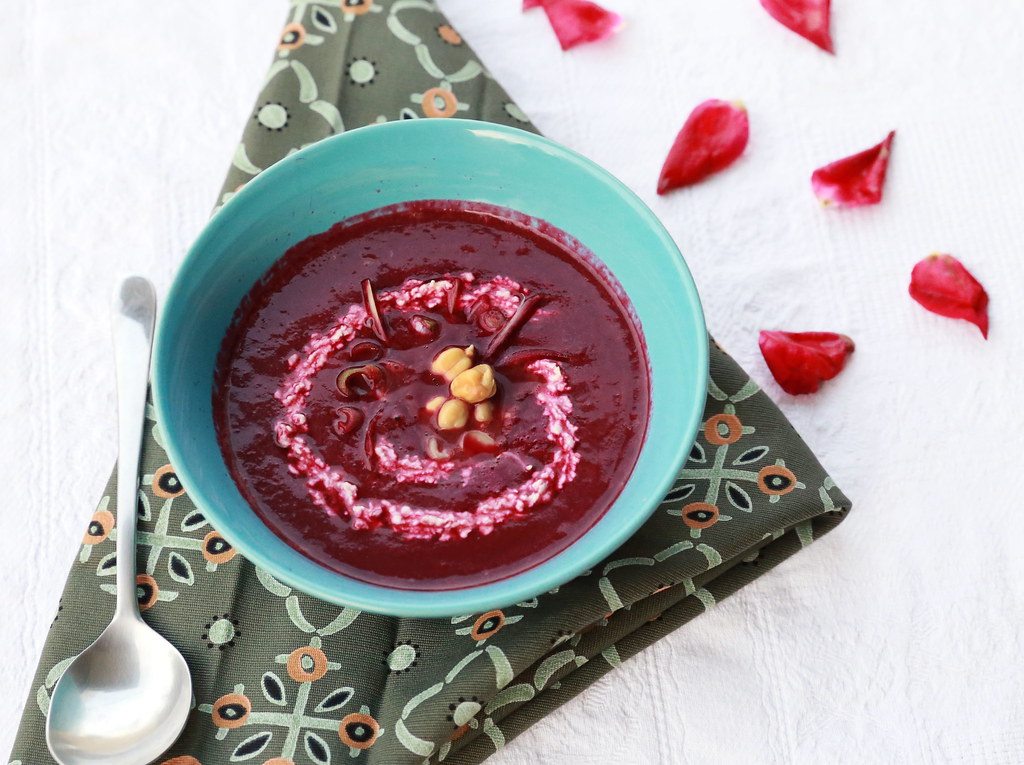 Borscht is a soup of Ukrainian origin and popular throughout Eastern Europe. In most countries, beets are the star ingredient that give this soup its sanguine hue. In some countries, tomato or potato may occur as the main ingredient, while beets act as a secondary ingredient or even omitted, such as the Polish white borscht Bialy Barszcz. Colour, ingredient and regionalism aside, in its multifarious forms Borscht is meant to be hearty and filling, being a main source of sustenance for its people. A native Ukrainian once emphasised the primacy of tanginess. “All authentic borscht recipes must have pickled beets,” he said. “That’s what gives it the sour touch, and if a borscht is not sour, it is not true Ukrainian borscht.” For a quick alternative to pickled beets, you may use sauerkraut juice or kimchi juice for the tangy flavour. A dollop of sour cream often adorns the soup. I might have – God forbid – put in hummus in my blasphemous version, but this is modernist cuisine. I did not have time to whip up a vegan sour cream, so hummus will do! 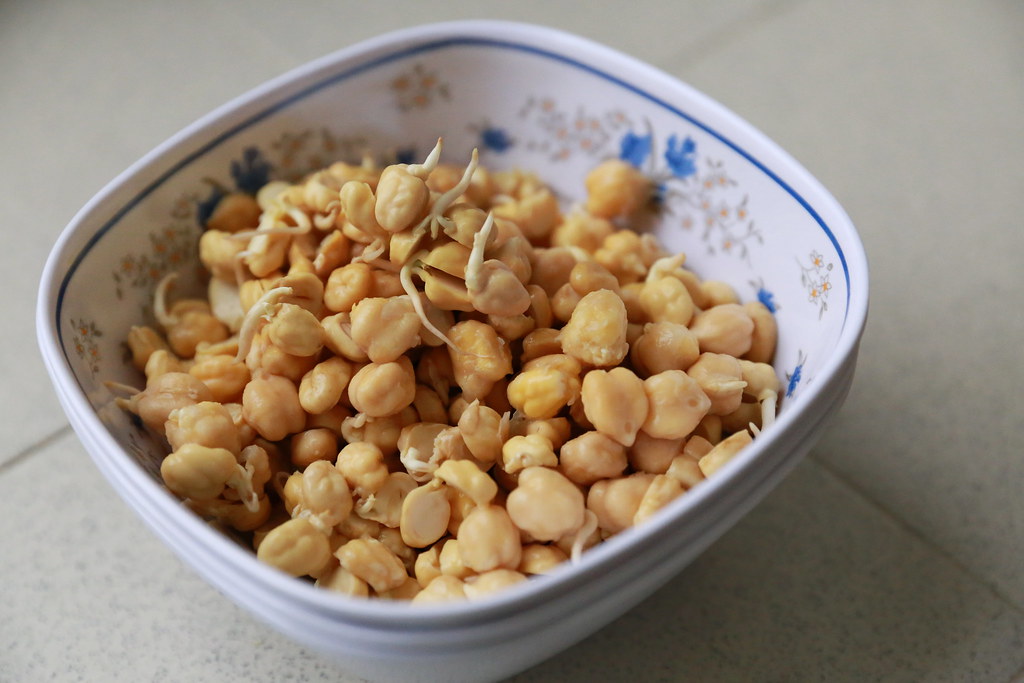 To make sprouted hummus, you need to prepare two or three days in advance to let the sprouts grow. I had made sprouted lentil hummus before but not chickpea hummus. The issue with sprouted lentils is their tiny skins that is hard to remove, giving the hummus a rough feel. Chickpeas being larger in size, their skins are easier to remove and the preferred – as well more more authentic – choice for making hummus. 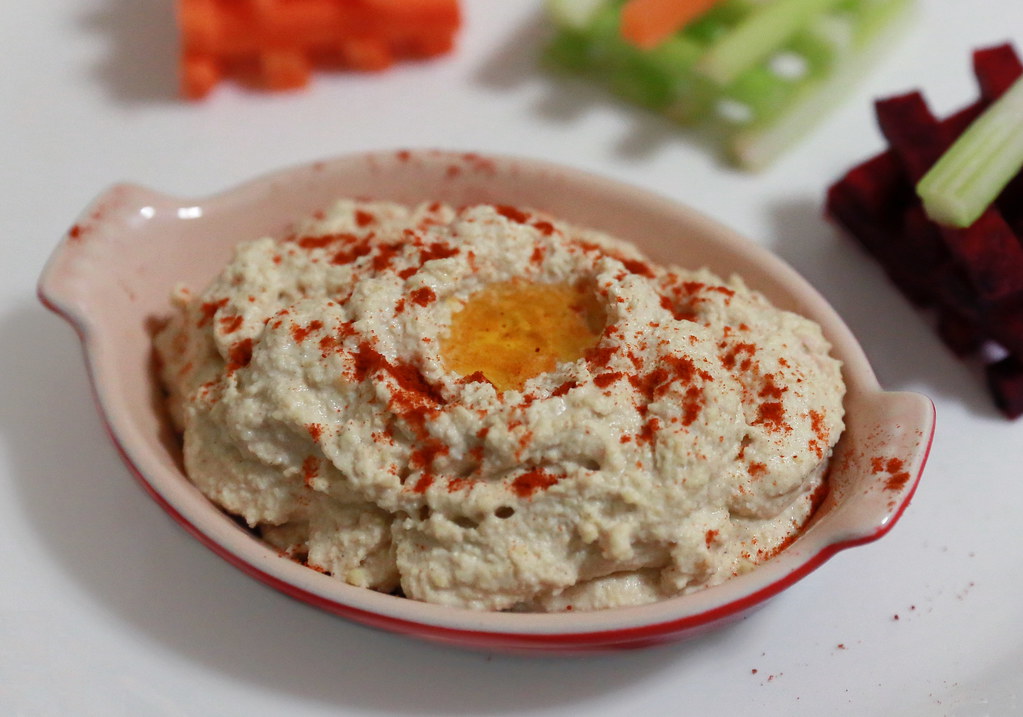 When I was making this, I got scared off by the funky smell at the end of the sprouting despite the multiple rinsing so I blanched them in boiling water for 1 minute to avoid food poisoning. Better safe than sorry!