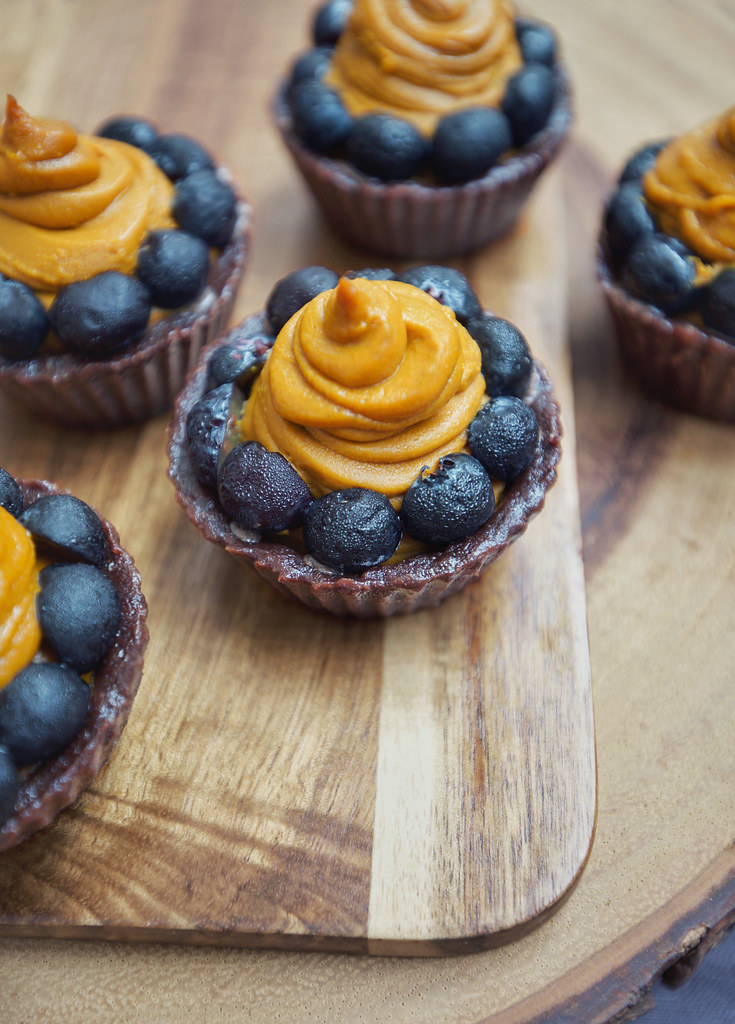 Away with boring cinnamon, nutmeg and cloves; give pumpkin pie a bubbly makeover with bubble milk tea! Unabashedly infused with malty Ceylon black tea, the astringent tannins rein in the sweetness of pumpkin puree and give balance. But what really makes this pumpkin pie special is a new method for pumpkin pie filling and pumpkin seed crust with a minimalist, zero-waste approach.

This pumpkin pie filling is made with an unconventional reduction method that is minimalist (less ingredients) and less processed. Traditional pumpkin pie filling is a custard stabilised by heat-coagulated egg whites, and sometimes starches such as cornstarch, arrowroot or tapioca. The vegan recipes I have come across increase the amount of starch or employ other gelling agents such as agar. Raw vegan versions call for cashews and coconut oil. But why add when you can reduce? Pumpkin is a semi-starchy vegetable. By simmering it long enough with high fat coconut milk, excess water is removed and the starch molecules swell and gelatinise, eventually and effectively rendering it down to a powerfully potent pumpkin paste. The fat in coconut milk encourages setting of the pumpkin mixture when chilled; I do not think it will work with other non-dairy milks. You will want to reduce the pumpkin mixture until it nicely coats the back of a spatula, or about 45% by weight of the original mixture. I find the concentrated natural sweetness of pumpkin sufficient, but you can add maple syrup or sweetener of choice if desired.

This recipe for Thai Tea Pumpkin Pie is just one example of how you can flavour your pumpkin reduction. Another way is using pandan leaves instead of tea leaves, which will give you Pumpkin Pandan Kaya! The only limit is your imagination. 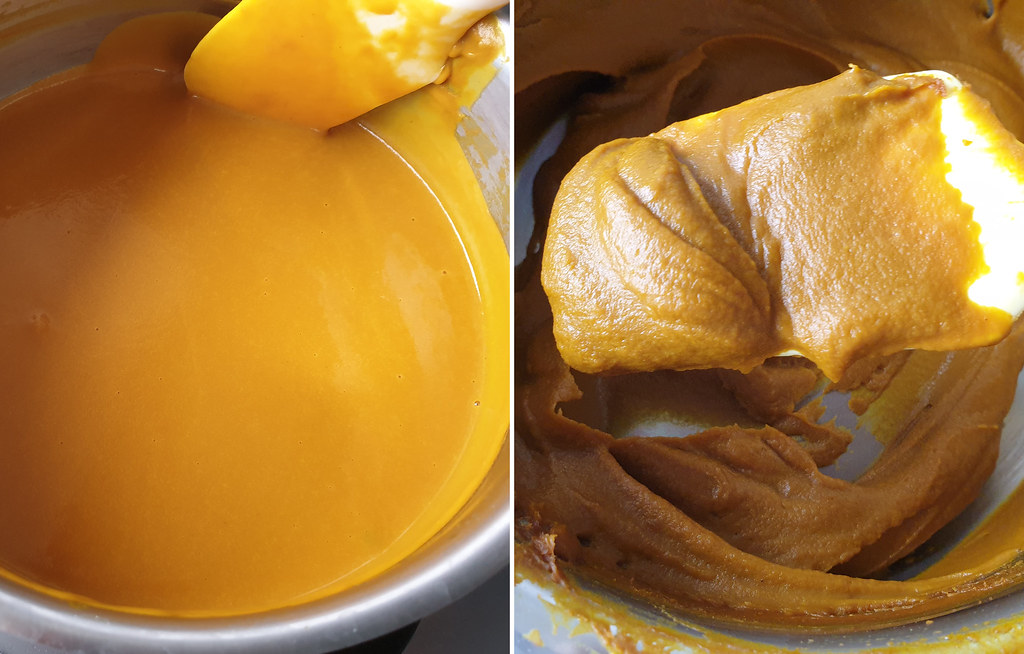 A Zero-Waste Approach to Pumpkin Pie

The seeds from the pumpkin can be used to make the pie crust. To do this, you halve and bake the pumpkin cut-side down without removing the seeds first – effectively “steaming” the seeds in its shell. I find that if you remove the seeds and roast them separately exposed directly to heat, they burn and dry out easily, which makes the inner endosperm more difficult to extract from the seed coat. I went for a cacao brownie crust this time, but on hindsight I think a more neutral crust would let the Thai tea flavour stand out better.

For this particular recipe, the spent black tea leaves can be re-used into condiments, such as lei cha soup or fermented as Burmese laphet thoke (although both are traditionally made with green tea leaves). 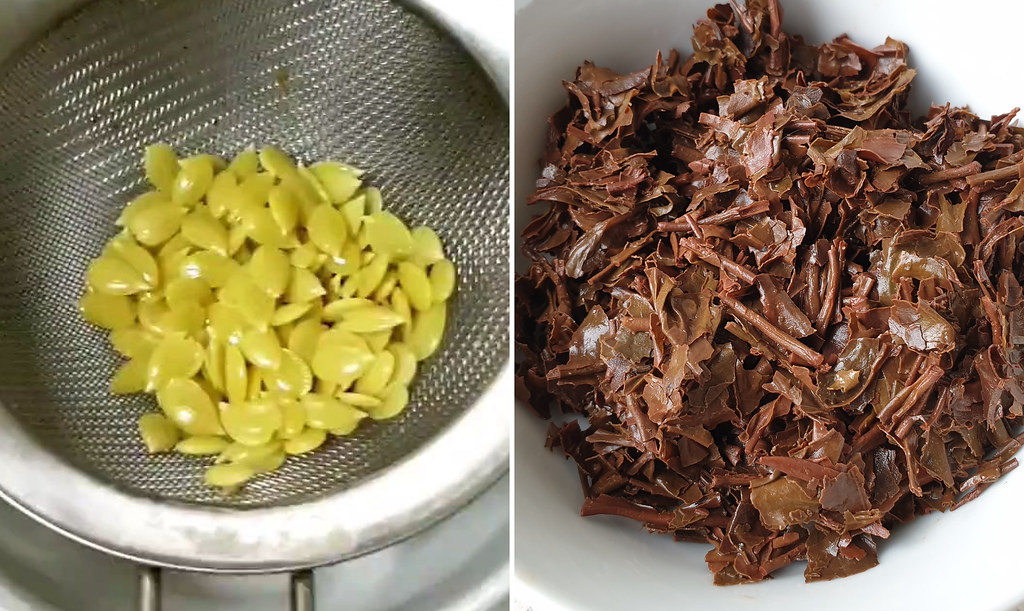 Zero-waste approach. Use pumpkin seeds from your pumpkin in the pie crust; re-use spent tea leaves as a condiment.

Dietary notes on this recipe

Vegan (dairy-free and egg-free).
Paleo (grain-free, gluten-free).
Processed starch-free (no arrowroot, corn or tapioca starch).
Nut-free and low seeds (a small amount in the crust).
Refined sugar free. Sweetened with dates and coconut sugar in the crust and pumpkin in the filling.
Oil-free (contains cacao butter from cacao paste).
Contains caffeine. Use a herbal tea such as roasted dandelion chicory or pandan leaves for a caffeine-free version, but note that the taste will change accordingly. 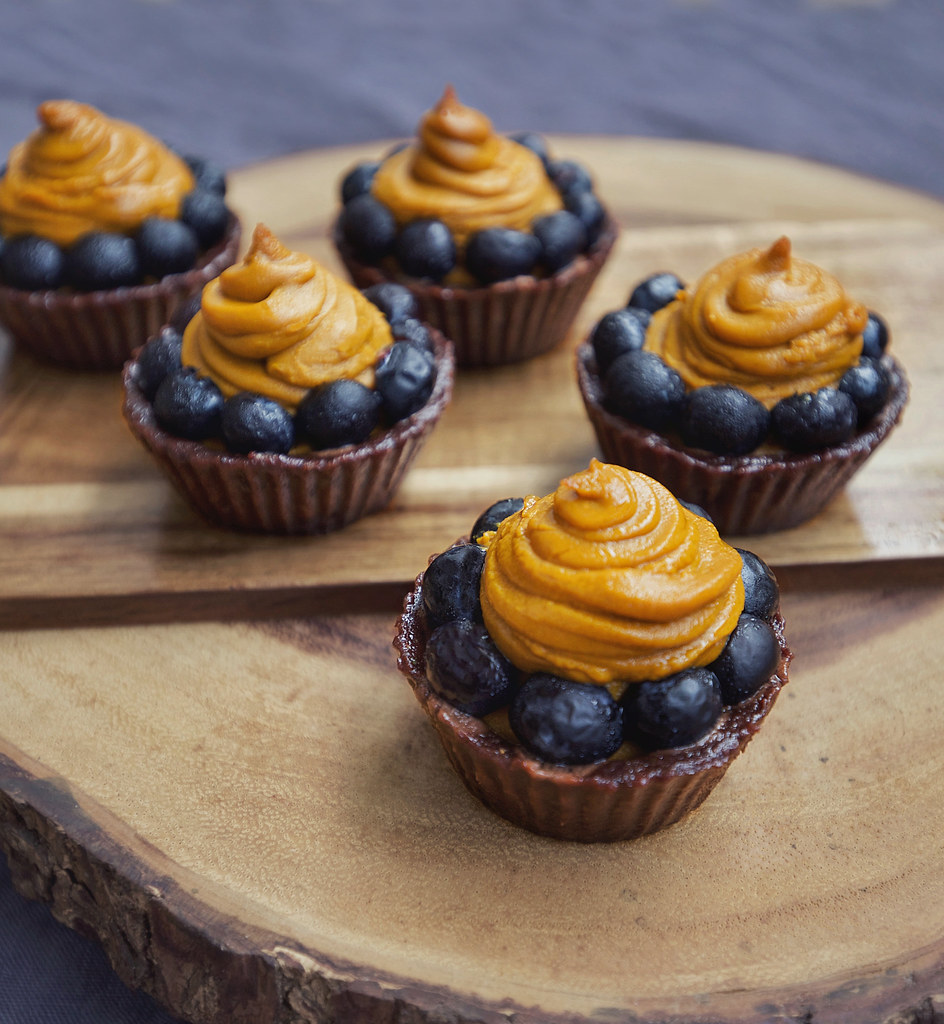 Give pumpkin pie a bubbly makeover with bubble milk tea! Astringent tannins of bold, malty Ceylon black tea rein in the sweetness of pumpkin puree. But what really makes this pumpkin pie special is the reductionist, zero-waste approach for pumpkin pie filling and crust.

For the Pumpkin Seed Brownie Crust

For the Thai Tea Pumpkin Filling

Preheat the oven to 175°C (350°F). Place the pumpkin halves cut-side down, seeds included, on a lined baking tray. Roast for 45-60 minutes, or until collapsed and extremely tender when pierced with a knife. Cool until you can handle it comfortably. Separate the pumpkin seeds from the flesh. Place pumpkin flesh into a blender or food processor and blend on high speed until smooth and creamy. Remove endosperm from pumpkin seed coat. Spread the shelled pumpkin seeds on a dehydrator screen and dehydrate at 46°C (115°F) for 24 hours, or until fully dry and crispy.

In a blender, combine the desiccated coconut and hot water. Let steep for 20 minutes; this helps to fully extract the coconut flavour. Blend on high speed for 2 minutes. Strain the mixture through a nut milk bag. You can return the coconut pulp to the blender and blend with another 1 cup water to yield a thinner second extract for drinking directly or use in smoothies, teas etc.