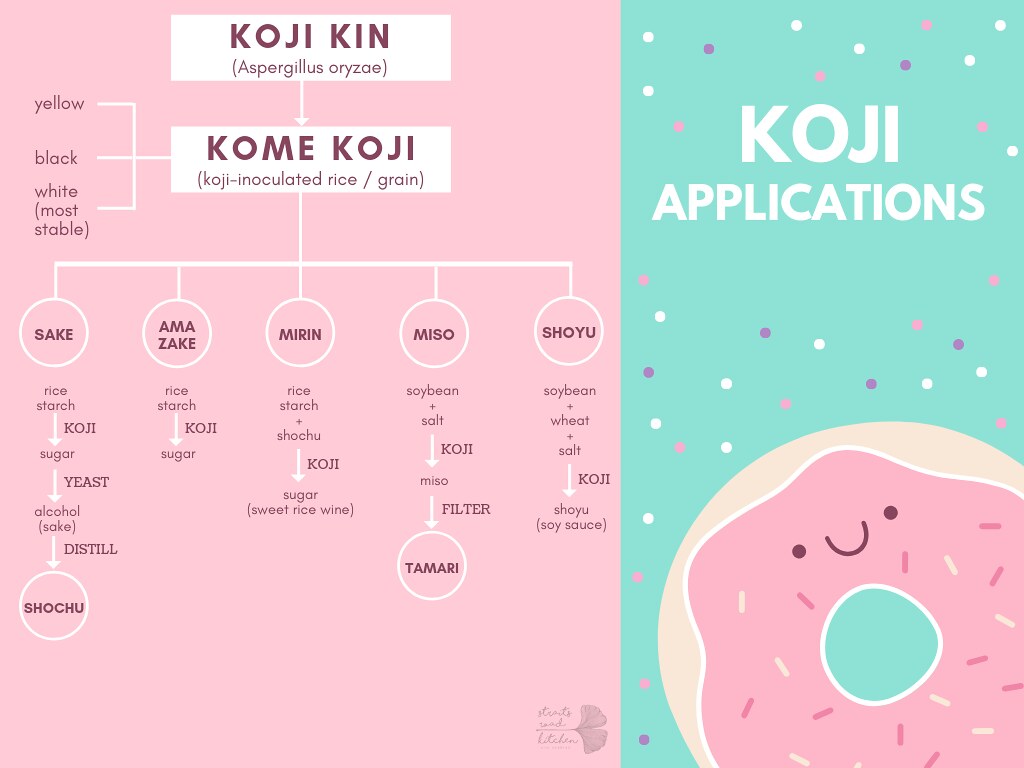 What does sake, amazake, mirin, miso, vinegar, and shoyu have in common? These staples of the Japanese pantry rely on one vital, microscopic organism: koji-kin, otherwise known as Aspergillus Oryzae. I have touched briefly on koji in my Amazing Amazake post. I decided to create a flowchart (with Canva) to illustrate more clearly how various products are obtained with koji.

There are three main types of koji-kin: yellow, black and white. White koji-kin is most stable and easy to maintain in all seasons for all types of applications. Yellow koji-kin is favoured by professional sake brewers, but becomes unstable in warmer weathers. Black koji-kin is used by some shochu makers and least common.

Koji secretes the enzymes amylase, peptidase (protease) and small amounts of lipase, which break down starches, proteins and fats respectively. Koji will produce more amylases at higher temperatures, and more proteases at lower temperature. So adjust the temperature of your setup accordingly to what you are making. While rice is the most common host for A. Oryzae, almost any grain can be fermented to make koji – millet, oat, buckwheat, wheat and soybeans.

Sake is rice wine. The method of fermentation is different from grape wine or beer because of the double action process for sake – simultaneous conversion of starch to sugar by koji and conversion of sugar to alcohol by sake yeast. The alcoholic fermentation for grape wine and beer occurs only with the action of yeast. Because of the double action, the alcohol content of sake can be higher than that of grape wine and beer, typically 15%, 11% and 5% respectively. Sake kasu is another byproduct of sake filtration and adds a lovely sweet complex taste to miso soup and desserts.

When sake is distilled, it becomes shochu. Thus, it has a higher alcohol percentage of 25%, and belongs to the same category of whiskey, scotch, and vodka. While in the olden days shochu was simply distilled rice-based sake, today’s shochu most likely contain fermented barley and sweet potatoes that are left over after a big harvest. Japanese shochu should not be confused with Korean soju.

Amazake is non-alcoholic sweet sake. There is not alcohol because no yeast is added. You can learn more about amazake and get a recipe for homemade amazake at my Amazing Amazake post.

Mirin is sweet sake, usually used for cooking. To make mirin, a dose of alcohol, traditionally a rice spirit like shochu, is added to stop the reaction before all the sugar is converted to alcohol. What is left is a sweet, mildly alcoholic liquid. Hon (true) mirin has an alcohol percentage of 14%.

Miso is a fermented paste made from a mash of cooked soybeans, koji and salt. Koji releases plenty of amino acids which account for the umami taste of miso. Miso can be aged for minimum of 3 months to years. While soybeans is the most common material for miso, grains or a mix of soy and grains such as barley can also be used with distinct flavour profiles.

Tamari is not to be confused with soy sauce or shoyu; it is a byproduct of miso fermentation. As miso ferments, umami-rich juices would rise to the top of the fermenter and form a puddle. Tamari is typically less salty and more viscous than soy sauce, and is gluten-free if no wheat or gluten-grain is used in the miso-making process.

Soy sauce is a close relative of miso but the ingredients and production procedure has fundamental differences. In making miso, koji-inoculated rice is combined with cooked soybeans; in shoyu, koji-kin is grown directly on a blend of boiled soybeans and toasted, cracked wheat.

Shio koji means salted koji, which is koji mixed with salt water and re-fermented. It is popular in Japanese cuisine, where it is used as a cure for protein-based ingredients including tofu. As a cure, it simultaneously seasons and tenderises, as the protease produced by koji breaks down proteins.

I hope in this post you have learnt about the mighty power of koji. Stay tuned for my upcoming results on shio koji-cured tofu and miso-cured tofu!